I don't see how it is possible? Because it's a DFA and the alphabet only contains $a$, shouldn't I only be able to look at modulo 11? I could make 1 mod 11 not accepting but then $a^{34}$ would not be accepted as well.

EDIT: The prof confirmed it was a typo. We are looking for a NFA. Thanks everyone!

This is not possible. A DFA on a one symbol alphabet is a directed graph with out-degree 1. The walk one follows from the start state consists of a (possibly zero length) path followed by a cycle. As all sufficiently long strings are accepted, all states in the cycle must accept. If the DFA has at most 11 states, a walk of length 23 must be in the cycle, so it must accept.

More generally, if a DFA on one symbol rejects $a^n$ but accepts all $a^m$, $m>n$, then it must have at least $n+1$ symbols and start with a path of length $\ge n$, the $n$th state rejecting, followed by a cycle of accepting states of length $\ge 1$.

Solomonoff's answer points out that no such DFA exists.

This answer shows that we can build a nondeterministic finite automaton (NFA) that satisfies the requirement, indicating that the original problem might be intended for NFA instead of DFA. 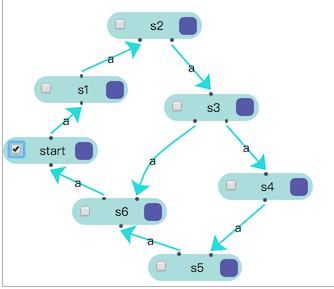 The above image is made using automatonsimulator.com. This answer is motivated by Hendrik Jan's comment.

Interested readers can further prove that 7 is the minimal number of states in an NFA that rejects $a^{23}$ and accepts all $a^n$ for $n>23$.

Not the answer you're looking for? Browse other questions tagged formal-languages automata finite-automata or ask your own question.