I’ve run into a challenging algorithm puzzle while trying to generate a large amount of test data. The problem is as follows:

(EDIT: further research instigated by @YuvalFilmus’s comment shows that this is equivalent to weighted sampling without replacement, a search term that leads to quite a lot of research.)

Now clearly the time complexity is at least $O(T)$ since we have to output that many items. But how closely can we approach that lower bound? Some algorithms:

Algorithm 3 is the best I’ve come up with. Here are some illustrations to clarify it: 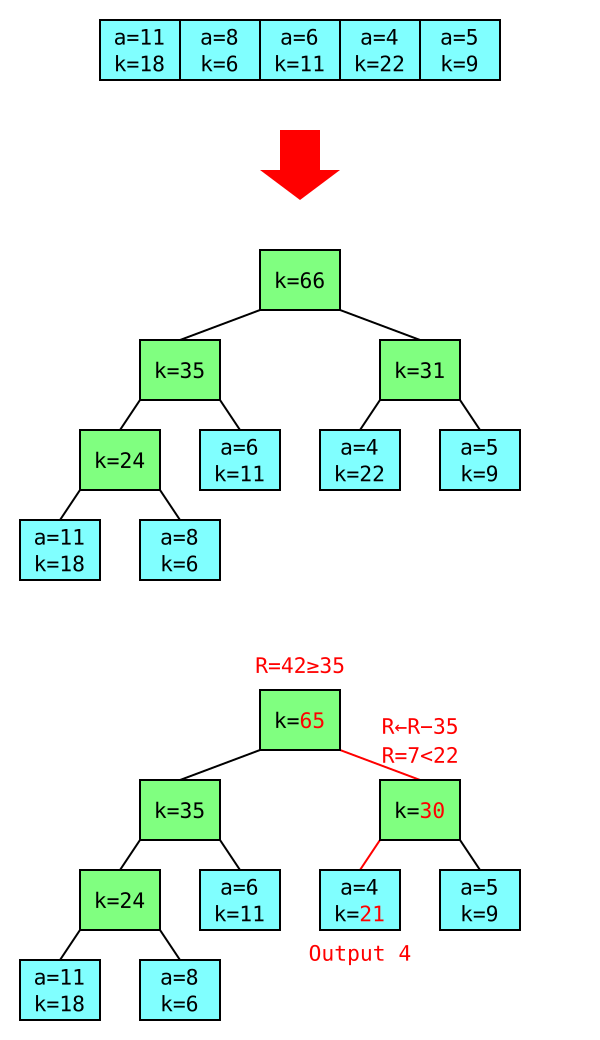 Does anyone know of a more efficient algorithm? I tried searching with various terms but could not find any discussion of this particular task.

Step 2. Use a memory-less permutation of the range $[1, T]$. I personally like Sometimes-Recurse Shuffle. A memory-less permutation can give you $\pi(k)$ directly for arbitrary $k$ in $\log T$ time. Some example code I have written a couple years back show how simple it is (with toy PRF implementation - replace that): https://gist.github.com/orlp/33535eefce782a59e185e4a971cda1a3.

Here's a pretty simple algorithm for weighted random selection without replacement, which is O(N) space and stochastic O(1) time per element selected (i.e. O(T) time for a complete permutation).

It's a combination of two common algorithms for weighted random selection: the rejection method (I can't find a reference for this one; it's as old as the hills although it frequently gets rediscovered, as for example the frequently-cited Lipowski & Lipowska 2011) and the alias method (Walker 1977; Kronmal & Peterson 1979). A good discussion of both of these methods (and many more) can be found in Chapter 3 of Non-Uniform Random Variate Generation (Luc Devroye, 1986) which is freely-downloadable through that link. (And kudos to Devroye for his rant about academic bloodsuckerspublishers. I can't find any unpaywalled copies of the 40-year-old papers cited above, so Devroye is the best reference I have. The algorithms are described below.)

The basic problem with both of these methods is that they require O(N) setup time, and the fact that the weight distribution varies after each selection is extracted would require reprocessing at every step, resulting in O(NT) time. In addition, the rejection method only provides O(1) selection time over a restricted range of possible weight distributions [Note 1], and we cannot guarantee that requirement for all distributions which might occur during a permutation. However, putting the two algorithms together solves both problems:

1) We use the alias method (slightly modified) to guarantee that the rejection method's distribution requirement is honoured; and

2) Because of the flexibility provided by the rejection method, we do the O(N) auxiliary processing less then once every N selections, so that it has an O(1) amortised contribution to the cost of doing a selection.

The rejection method is incredibly simple. We start with some weight $\omega_\alpha$ which is at least as great as any weight in the distribution. (That's the required precomputation; clearly, we could compute $\omega_\alpha = max_{i=1}^N(\omega_i)$

In effect, this corresponds to firing a dart at an $N \times \omega_\alpha$ grid, in which the bottom $\omega_i$ squares in column $i$ are coloured. If the dart falls on a coloured square, we return the number of that column; otherwise, we try again. It should be clear both that the values returned obey the desired probability distribution, and that the probability of returning a value on any given iteration is $\sum \omega_i \over { N \omega_\alpha }$.

But, of course, without doing some more work we cannot make this assertion. However, it's worth noting that if $\omega_{mean}$ is not too small, then removing an element has little impact on the ratio. Consequently, we can avoid recomputing $\omega_\alpha$ on every step. But that's getting a bit ahead of ourselves.

Suppose we take the chessboard described above and attempt to level it out by filling in small columns using coloured squares from the big columns. It turns out that we can always find an arrangement in which there are only two colours in any column, and in which all of the columns are the same height (within one square, since there is no guarantee that the total weight evenly divides N). We call the alternative value for each column it's alias ($a_i$) and we store two weights for each column: $\omega^0_i$, the number of squares corresponding to the value at index $i$, and $\omega^1_i$, the total number of coloured squares in that column. [Note 3]

Evidently, we can choose $\omega_\alpha = \lceil T / N \rceil$ and then run a slightly modified version of the rejection algorithm. The only difference is that the iteration is changed to:

The alias table (in this version) requires storing $3N$ numbers, all of them in the same range as the problem's inputs. That means that when we have reduced $T$ to $3N$, we can switch to an alternative algorithm without using any more space: collect all the remaining values in a single array of size $3N$, shuffle it randomly, and then generate its elements in sequence. That lets us assume that $\omega_\alpha$ is at least 3, which is convenient because it lets us limit the expected number of rejections without recomputing the alias table too often.

so the expected number of rejections is (much) less than $1/3$.

Indeed, we might be prepared to live with a larger number of rejections. If, for example, we wanted to limit the expected number of rejections to 1, it would suffice to recompute the alias table every time $T$ fell to half its previous value (again, stopping at $T = 3N$), which would mean that we would do $lg N$ recomputations. However, experimentation indicates that the cost of recomputing the alias table is so small that this is not worthwhile.

Not the answer you're looking for? Browse other questions tagged algorithms time-complexity randomized-algorithms sampling or ask your own question.

5
What is the complexity of these tree-based algorithms?
1
The algorithm yields optimal ternary codes
6
Compute height of AVL tree as efficiently as possible
0
Finding top k which are the most different from each other
4
Is this probability distribution data structure already discovered?
3
Computing Hamming Distance Between Binary Vectors
3
Complexity of forming a min heap out of a given array with k inversions
2
Time complexity of a tree-based algorithm
0
Building Suffix Array from Suffix Tree. Inorder visit when node has more than two children