I'm trying to design a DFA in a 4 digit language, for example L(a,b,c,d) or L(1,2,3,4) that accepts strings with the last character being already repeated before.

Everyway im trying, i get so many transitions im literally lost in them...

So, for example, abbdb is accepted (because b is showed again at least 1 time) but abc is rejected since c (last char) never shows up more than 1 time.

I managed to make it work for a language with 2 DIGIT:
For example: 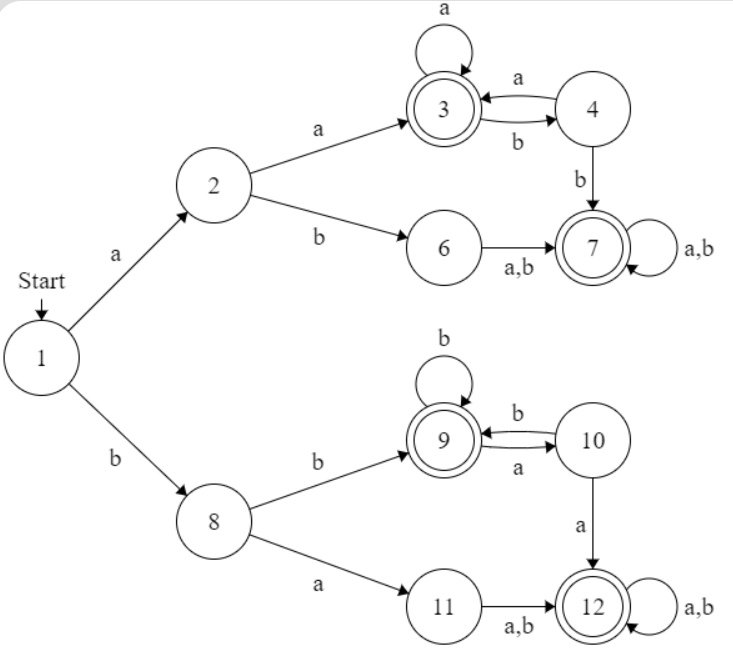 Which accepts for example aa or ababa but can't do for 4 DIGIT language.

I would write out a description of this machine rather than drawing it.

5
Designing a DFA that accepts strings such that nth character from last satisfies condition
0
Help me resolve my doubts about infinities, exemplified by an example of non DFA acceptable language
4
Show that for any natural number n, there is a regular language that is not recognized by any DFA with at most n final states
1
How to write a DFA where the second digit is equal to the last digit of binary strings?
1
Complete finite automaton to never fail a match but either match original or up until the orginal
0
Confusion regarding the Definition of 2 Way Finite State Automata?
2
DFA which accepts all strings starting and ending with 'aa'
0
Determine if an NFA accepts infinite language in polynomial time
1
Over the alphabet {a,b,c,d}, how would i construct a NFA that only accepts strings that end with a letter that is already part of the string?