I don't understand (much as I've researched) exactly what the reasoning is behind KP comparing in both cases (take the element/don't take it) to the above row $('k-1')$ while CCP only does this when it doesn't take the coin (the same number that's a row above in the same column persists).

To evaluate the case where the coin is taken, CCP says to go back on the same row as much columns as you get when subtracting the coin value of that row from the column you're in . Then it says to add 1 (because you'd be taking the coin).

Supposing I understood this well enough, the latter logic makes perfect sense to me. I don't see the need for KP to go up a row when taking the element (I see why it adds 'v' and goes back a number of columns, it's just the $'k-1'$ that baffles me)

What's the logic behind this? 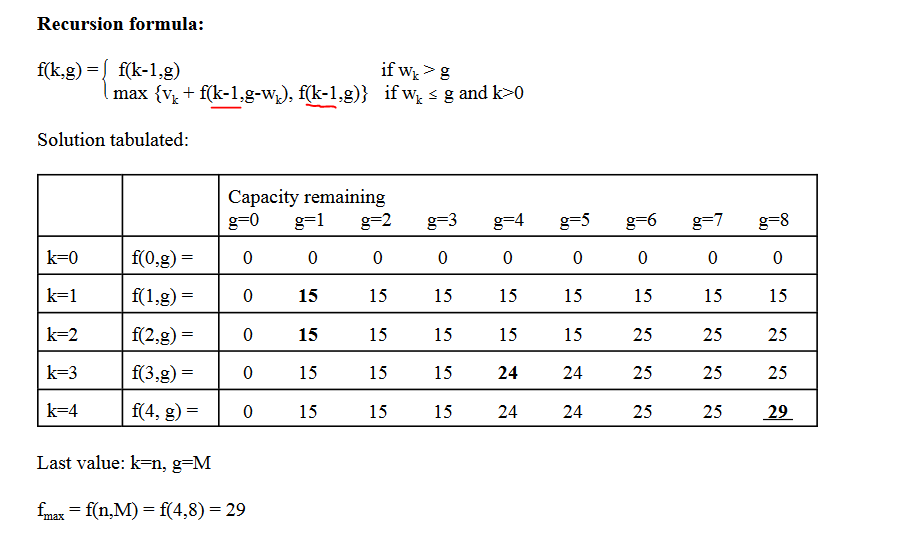 Goes back on the same row where our starting point is(case where coin is taken). 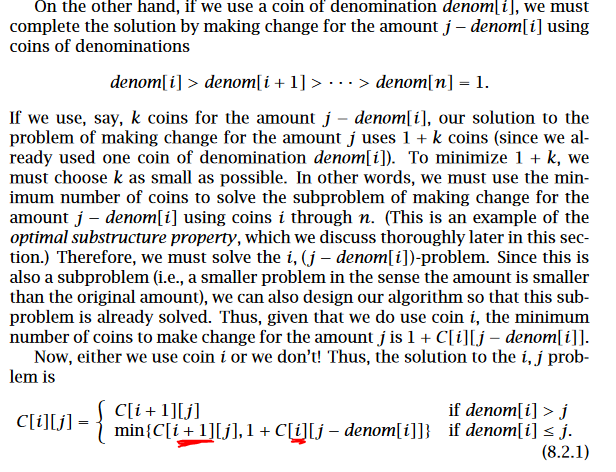 The knapsack problem only allows you to add each item once. Subtracting from $k$ is, in a sense, iterating through the items and resolving a different one each recursion.

Put another way, if you didn't subtract 1 from $k$, you'd be able to add the same element multiple times.

In CC you can use same coin INFINITE times. But in KP you can use the same weight, not more than once. Check http://www.ccs.neu.edu/home/jaa/CSG713.04F/Information/Handouts/dyn_prog.pdf

Therefore, the maximum value that can be obtained from n items is the max of the following two values.

2) Value of nth item plus maximum value obtained by n-1 items and W minus weight of the nth item (including nth item).

If the weight of the nth item is greater than W, then the nth item cannot be included and case 1 is the only possibility.

Not the answer you're looking for? Browse other questions tagged dynamic-programming recurrence-relation knapsack-problems coin-change or ask your own question.