If I have a Delaunay Graph, what is the mean geodesic distance between two randomly chosen nodes. I know that in a small world network, it is in O(log(N)), with N being the number of nodes.

As you have probably come to the right conclusion by now, for a Delaunay graph, the magnitude of the mean distance between two randomly chosen nodes depends on the particular configuration of the points. 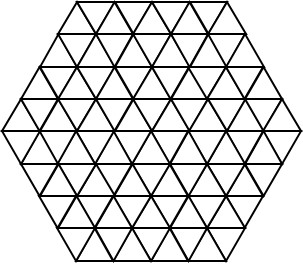 We can also consider the row of triangles just above the middle line in that honeycomb as a separate graph. It has $4n+1$ nodes. The average distance between two nodes is $\Theta(n)=\Theta(4n+1)$.