If a DFA were implemented as a circuit, what would the empty string correspond to as input?

Say we have a DFA like the one shown below that accepts the empty string, $\varepsilon$.

Also suppose the functionality of this DFA has been implemented as a circuit so that an led lights up whenever an accepted word is detected as input.

While this hypothetical circuit is "idle", i.e. not receiving any a's or b's as input, is the led on? Is it appropriate to think of $\varepsilon$ as idling without real input? Is that what $\varepsilon$, an input string of length zero, represents?

As a follow up, for a circuit implementation of the next DFA, would it have an led that never turns on even while idle? 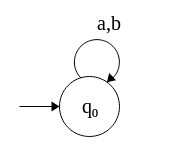 Deterministic automata over finite words (DFAs) that accept or reject a given word can be seen as finite-state machines that read elements from some alphabet $\Sigma$ and output elements from the output alphabet $\mathbb{B}$ that represent whether the word read so far is accepted by the original DFA.

Translating such finite-state machines to circuits is a classical topic in technical computer science. For instance, you could assign a bit-vector of the same length to every state and then use the Espresso logic minimizer to compute a relatively efficient circuit. Note that such circuits have memory.

The answer to your question now depends on which model you use: If you translate your DFA into Moore machine form, the machine first outputs whether the word seen so far is accepted and only then looks at the next character. In the first step of its computation, it thus outputs whether the empty word is accepted. Mealy machines read the respective next character in every step and only then produce the next output. Thus, whether the empty word is accepted by the original DFA cannot be observed when looking at a run of the Mealy machine (unless you do the translation in a way that the machine always delays its output by one step, which normally increases the number of states by a factor of at most two).

The model that Yuval Filmus was referring to in his comments is one that is used in circuit complexity. There, it is looked at how large circuits need to be that categorize inputs of a fixed length into accepted and non-accepted ones. The characters of the input words are all read at the same time in this model and the circuits do not have memory.

Not the answer you're looking for? Browse other questions tagged formal-languages finite-automata or ask your own question.

8
Importance of the empty string
3
What does an input string of epsilon mean?
1
Why does a DFA either contain all or no words $a^k$ if it loops for $a$ in all states?
15
What is the origin of λ for empty string?
2
Can a DFA have an empty string as input?
1
NFA accepting the empty string
2
Show that if L is regular, then third(L) is also regular. Hint: Construct an ϵ-NFA from the DFA for L
1
Are there strings which get accepted only by PDA by empty stack and not by PDA by final state, and vice versa?