I have been learning Verification by model checking recently and I get the following question: 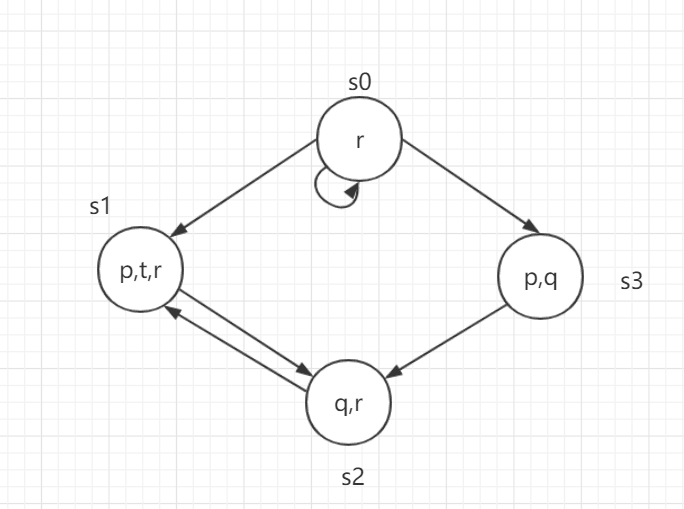 I think it is incorrect because there is a deadlock or infinite loop about $s_0$ after the state is starting from $s_0$, which make it invalid under $EG\ AF\ $ condition.

Am I correct? How can I prove it (or give a counterexample)?

You're correct. Another way to see would be to consider the de-morgan equivalent: $\neg (AF~EG~\neg p)$. To show this invalid, we can show its negation $AF~EG~\neg p$ is valid, which is easier: The formula $AF~EG~\neg p$ says on all paths starting at $s_0$, we eventually get to a state such that there is a path where $\neg p$ holds forever. And indeed that is true in the path $s_0 \rightarrow s_0 \rightarrow\ldots~.$ Since we established the negation, your original formula is invalid as you yourself concluded.

Thinking about CTL can be tricky. A good way is to always double-check using a CTL model checker, like the following:

Which is NuSMV's way of saying you can simply stay in the starting state and it would be a counter-example to your property.

Not the answer you're looking for? Browse other questions tagged logic model-checking computation-tree-logic or ask your own question.

6
Why are there two different `until` ($\cup$) semantics in Timed Computation Tree Logic?
2
CTL vs LTL - when a formula satisfy a model
1
CTL - model checking for formula $A [a \cup b]$
2
How to define the Atomic Propositions in Model Checking
2
How to express the existence of winning strategy of the starter of a game in temporal logic?
2
How to prove a LTL formula correct in a specific model?
2
Proving that a property is k-inductive with an SMT solver (parametric resettable counter)
0
CTL formula for “for every computation it is always possible to return to the initial state”