IA network that is path-consistent, but not consistent

Yes, you are correct. 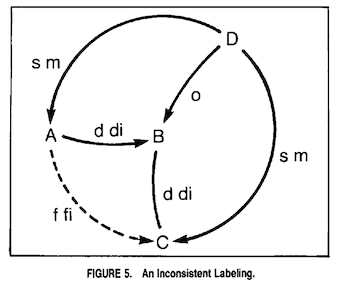 It seems the arc between interval $B$ and $C$ in the above figure is missing its arrowhead. However, you can assign either direction to that arrow since the relationship $(d\ di)$ is symmetric.

It should be noted that this algorithm, while it does not generate inconsistencies, does not detect all inconsistencies in its input. In fact, it only guarantees consistency between three node subnetworks. There are networks that can be added which appear consistent by viewing any three nodes, but for which there is no consistent overall labeling. The network shown in Figure 5 is consistent if we consider any three nodes; however, there is no overall labeling of the network. To see this, if we assign the relationship between $A$ and $C$, which could be $f$ or $fi$ according to this network, to either $f$ alone, or $fi$ alone, we would arrive at an inconsistency. In other words, there is no consistent labeling with $A-(f)\to C$, or with $A-(fi)\to C$, even though the algorithm accepts $A-(f\ fi)\to C$.

I would encourage you to read that seminal paper by Allen for more information.

Not the answer you're looking for? Browse other questions tagged constraint-satisfaction or ask your own question.

3
Isn't Domain of a variable nothing but a constraint?
3
existence of a permutation that satisfies order-constraints
1
Do approximation results for CSPs hold even when domains are of finite but different size?