There are instances when WL algorithm fails. For example graphs G1 and G2 below have the same coloring after WL-1 algorithm. 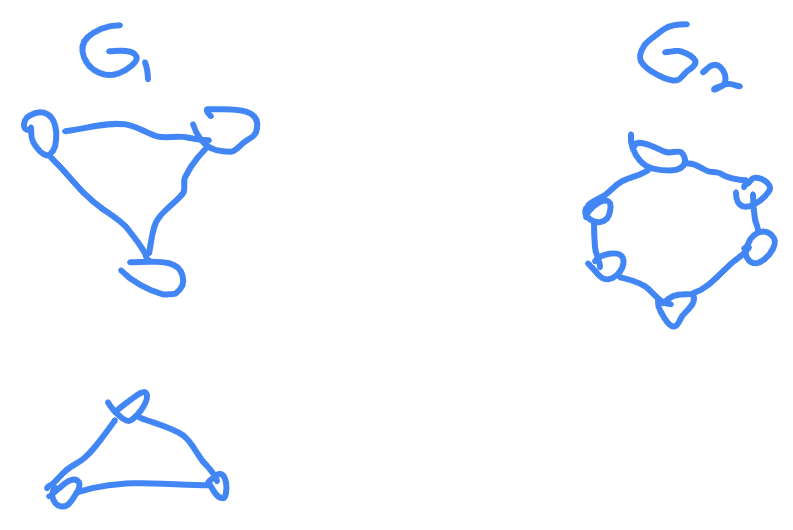 However, one of these graphs is disconnected. So what are the instances of undirected connected graphs for which WL algorithm fails?

Yes, there are non-isomorphic connected graphs that cannot be distinguished by Weisfeiler–Lehman. The following construction is due to Cai, Fürer and Immerman (An Optimal Lower Bound on the Number of Variables for Graph Identification, Combinatorica 12(4):389–410, 1992; PDF).

Take any connected, $3$-regular graph $G=(V,E)$. We will produce non-isomorphic graphs $G_\parallel$ and $G_\times$ from $G$, that are indistinguishable by Weisfeiler–Lehman. These will be made by producing a gadget for each vertex of $G$ and, for each edge $xy\in E$, connecting the gadgets for $x$ and $y$ by a pair of parallel edges.

The vertices of $G_\parallel$ are is defined as follows.

The edges of $G_\parallel$ are defined as follows. For each edge $xy\in E$, we add:

Proof sketch. You can move the cross edge around the graph in the following sense. For any pair of edges $ij,jk\in E$, there's an isomorphism of $G_{ij}$ that exchanges $a_{j,i}$ and $b_{j,i}$ and exchanges $a_{j,k}$ and $b_{j,k}$. This isomorphism is a permutation of the vertices $c_{j,S}$, and it fixes every other vertex in $G_{ij}$. If you draw the fragment of the graph corresponding to vertex $j$ and its incident edges, the isomorphism should be pretty obvious.

This means that $G_{ij}\simeq G_{jk}$, because the isomorphism "uncrosses" the edge $ij$ and "crosses" the edge $jk$. Since $G$ is connected, it contains a path whose first edge is $uv$ and whose last edge is $xy$, and we can use the isomorphisms corresponding to each adjacent pair of edges in this path to move the cross in $G_{uv}$ to $xy$. $\Box$

By Lemma 1, we're entitled to use the name $G_\times$ for an arbitrary graph $G_{xy}$. We now have the graphs $G_\parallel$ and $G_\times$; it remains to show that they're non-isomorphic and that they're indistinguishable to Weisfeiler–Lehman.

Now, indistinguishability. Weisfeiler–Lehman is definable in so-called "fixed-point logic with counting." This is first-order logic plus:

A separator of a graph $G=(V,E)$ is a set $S\subseteq V$ such that no component of $G-S$ has more than $|V|/2$ vertices. In the following, I say "less than about $2k$" because I'm silently translating from fixed-point logic with counting to so-called "infinitary logic with counting", which roughly doubles the number of variables. I don't remember the exact details, and it's not important enough to hunt them down.

Theorem 3. Let $\varphi$ be a formula of fixed-point logic with counting, using $k$ distinct variables. If $G$ is a graph with no separator of size less than about $2k$, then $\varphi$ cannot distinguish $G_\parallel$ from $G_\times$.

Proof sketch. Very roughly speaking, while you're evaluating the formula $\varphi$ on $G_\parallel$ or $G_\times$, you might need to consider $k$ vertices as being the value of some variables at the current iteration of an inductive construction and $k$ more variables as being the value of the variables at the previous iteration. The fact that $G$ has no small separators means that, even if we fix those vertices, we can still move the cross around in a large component of the rest of the graph, without the formula "knowing" that we've done that, so the formula can never "see" the cross, so it can never tell the difference between the graph with the cross and the graph without it. $\Box$

For any fixed $d$, $d$-dimensional Weisfeiler–Lehman can be expressed as a formula of fixed-point logic with counting, using some number $k$ of variables ($k\approx 2d$ is enough, as I recall). Since that formula can't tell the difference between the non-isomorphic graphs $G_\parallel$ and $G_\times$ as long as $G$ has no small separators, nor can Weisfeiler–Lehman.

Guess who got a PhD doing this kind of stuff...

Connect all vertices to a common one.

One epic answer by David, one simplest answer by Yuval. However, there is no graphs. I mean, actual visual graphs.

Here is the famous beautiful negative instances to 1-dimensional Weisfeiler-Lehman test of graph isomorphism. The Shrikhande graph is at the left and the $4\times 4$ rook's graph is at the right.

The above picture is taken from mathematicaladd.wordpress.com.

Not the answer you're looking for? Browse other questions tagged graphs combinatorics graph-isomorphism or ask your own question.

15
How to approach Dynamic graph related problems
11
Graph isomorphism problem for labeled graphs
4
Sufficient condition for simple graph isomorphism?
2
counterexample for this graph isomorphism algorithm
2
Polynomial-time algorithm for Graph Isomorphism in case of Maximum Constrained Maximum Degree
4
Equivalent Colorings of Graphs
1
Alternatives to directly connected networks for representing frequently-updated graphs
2
Articulation points (or cut vertices), but only subset of vertices need to be connected
1
Finding pairs of vertices which would disconnect a graph