Let T be a tree with root r and S a set with an even number of vertices of T. Design a polynomial time algorithm that finds |S|/2 simple and disjoint paths in edges matching pairs of vertices in S. The following figure shows an example in which S consists of the six vertices enclosed in circles and three paths (denoted by three different types of dotted lines) that match those vertices.

Hint: Gain intuition by making instances like the one in the figure and observing what happens when you walk the entire border of the tree almost touching it, but not really doing that; then think about how to express the idea of such walk with a recursive algorithm.

I tried to analyze the problem but I don't really understand how to express it as a recursive algorithm, could you help me, please? 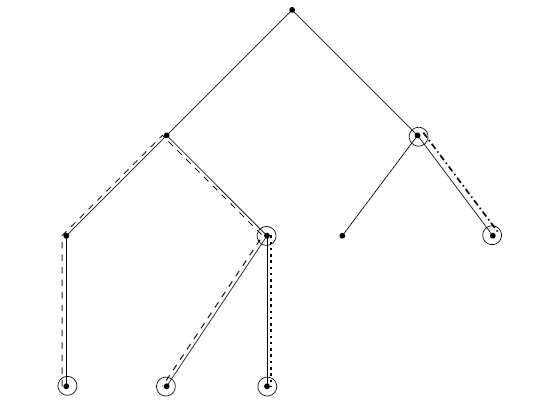 One easy case is when $r \notin S$ and $|S_i|$ is even for all $i$. In this case, we can simply recurse on the subtrees. There are two complications that arise in the general case:

The two complications are related, but let us tackle them one by one. Suppose first that $r \notin S$. If $|S_i|$ is odd for some $i$, then we would like to fix that. The only reasonable way is to add $v_i$ to $S_i$ if $v_i \notin S_i$, and to remove $v_i$ from $S_i$ is $v_i \in S_i$. We now solve the modified problem recursively, and have to somehow derive a solution for the original problem.

Let us introduce some notation: $O$ is the set of $i$ such that $|S_i|$ is odd, and $S'_i$ is the set $S_i$ after modification (adding or removing $v_i$). Consider a solution for the new instance. We will derive a solution for the original instance by pairing up the indices in $O$. Suppose that we chose to pair $i,j$, and consider the solutions for $S'_i,S'_j$. There are three cases to consider:

When $r \in S$, we only have to modify the above strategy a little. We arbitrarily pair $r$ with some $i \in O$, and then proceed much as above. This time there are only two cases:

Not the answer you're looking for? Browse other questions tagged algorithms graphs algorithm-analysis trees recursion or ask your own question.

2
How can I reduce a product of transpositions?
2
Polynomial time solution for bipartite matching
6
Partitioning an undirected, unweighted, square planar graph paths that join certain pairs of nodes
6
Algorithm: Shortest path (walk) with keys and doors
0
CLRS Exercise 24.3-4 - Confirm Output of a Program Claiming to Implement Dijkstra's Algorithm
1
Finding pairs of vertices which would disconnect a graph