In CLRS, in the later part of breadth first search topic, for unweighted graphs, it says:

Now I have further small doubts:

Which of above points are correct and which are wrong?

In fact, a MST is a subset of the edges building a tree (thus without cycle) using the minimum edge weights. It has exactly N-1 edges for a N nodes graph.

When you use BFS or DFS to explore a graph, you build an exploration tree, which is the shortest path tree for BFS. And if the graph is unweighted, you can say this tree is a MST, yes so 1. and 2. are true.

3. is true, MST and SPT are different. Just make BFS and DFS on a 3-clique (3 nodes connected to each other) to have an example.

4. is true but remember that "minimum" adds no information to any spanning tree of an unweighted graph. And also that a N nodes tree has exactly N-1 egdes. 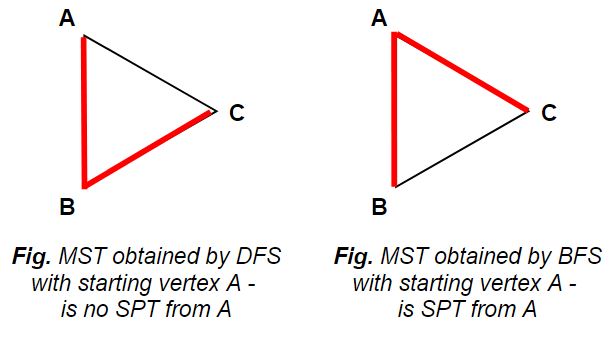 66
Minimum spanning tree vs Shortest path
26
Why can't DFS be used to find shortest paths in unweighted graphs?
9
If all edges are of equal weight, can one use BFS to obtain a minimal spanning tree?