I am seeking help understanding Floyd's cycle detection algorithm. I have gone through the explanation on wikipedia (http://en.wikipedia.org/wiki/Cycle_detection#Tortoise_and_hare)

Can someone help by providing an explanation, hopefully different from the one on wikipedia, as I am unable to understand/visualise it?

You can refer to "Detecting start of a loop in singly linked list", here's an excerpt: 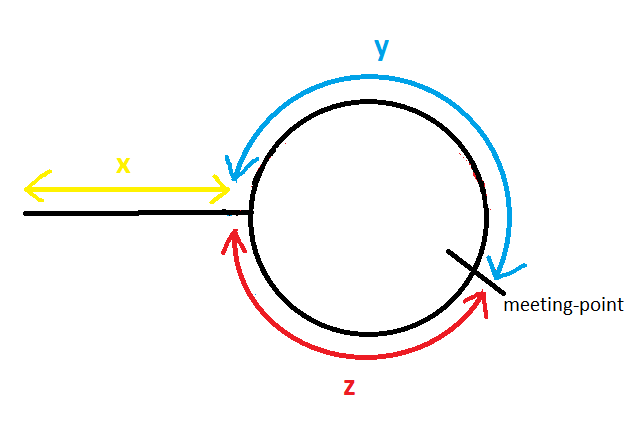 Since fastPointer travels with double the speed of slowPointer, and time is constant for both when the reach the meeting point. So by using simple speed, time and distance relation (slowPointer traveled half the distance):

Hence by moving slowPointer to start of linked list, and making both slowPointer and fastPointer to move one node at a time, they both have same distance to cover.

They will reach at the point where the loop starts in the linked list.

share|cite|improve this answer|||||
edited 11 hours ago

I have seen the accepted answer as proof elsewhere too. However, while its easy to grok, it is incorrect. What it proves is

$x = z$ (which is obviously wrong, and the diagram just makes it seem plausible due to the way it is sketched).

What you really want to prove is (using the same variables as described in the diagram in the accepted answer above):

so, what we want to prove is:

Or that z is congruent to x (modulo L)

The above equation proves that $x$ is the same as some multiple of loop length, $L$ minus $y$. So, if the fast pointer starts at the meeting point, $M$ or at $x + y$, then it will end up at the start of the loop.

I found the answer on stackoverflow. Thanks if anyone was looking into this for me. And for those who like me wanted an explanation, please refer to: https://stackoverflow.com/questions/3952805/proof-of-detecting-the-start-of-cycle-in-linked-list The chosen answer to the question, explains it!

Not the answer you're looking for? Browse other questions tagged algorithms linked-lists or ask your own question.