I'm looking at Transport Triggered Architectures (also this), linked to from an OISC page listing many different 1-Instruction Set Computers. It basically says the following:

An addition operation can be executed in a TTA processor as follows:

The second move, a write to the second operand of the function unit called ALU, triggers the addition operation. This makes the result of addition available in the output port 'result' after the execution latency of the 'add'.

The ports associated with the ALU may act as an accumulator, allowing creation of macro instructions that abstract away the underlying TTA:

They also link to the Copper Co-processor, but that has 3 instructions. In addition, the above shows how you can create the 3 "macro instructions" from the "move" instruction, so it sort of moves away from a more detailed explanation of the move instruction and how it can be used in a OISC.

The other wiki page also states:

A transport triggered architecture uses only the move instruction, hence it was originally called a "move machine". This instruction moves the contents of one memory location to another memory location combining with the current content of the new location:

So from all this I understand that basically the move instruction moves data from one place in memory to another. The memory are the "register files" (which I'm not sure exactly what they are), and this is done by reading and writing from the "transport bus". But already there there are 2 operations (read and write), so I'm confused how this is only actually 1 instruction (a OISC). In addition, I don't see exactly how those r1 -> ALU.operand1 3 "steps" are actually just 1 operation each, I would like to know a little more on what's actually happening.

This looks like it could help, so will take a look here as well.

The sequential TTA code of the program generated by the front-end is read by the back-end and transformed into an internal representation. The following definitions define the elements of this representation:

Definition 3.1 A program P describes the behavior of an application. It consists of a set of procedures.

Definition 3.3 A basic block b is a sequence of consecutive instructions in which the flow of control always enters at the beginning and always leaves at the end. A basic block consists of a set of operations.

Definition 3.4 An operation o describes the computation to be performed on an FU. An operation consists of a set of moves.

Seeing diagrams such as this make me wonder what the Function Units (FU) are implemented as, as it seems the MOVE instruction would then be delegating to either software or hardware defined "circuits" and thus not really be a true OISC, just hiding all the more-than-one instruction operations inside an FU. 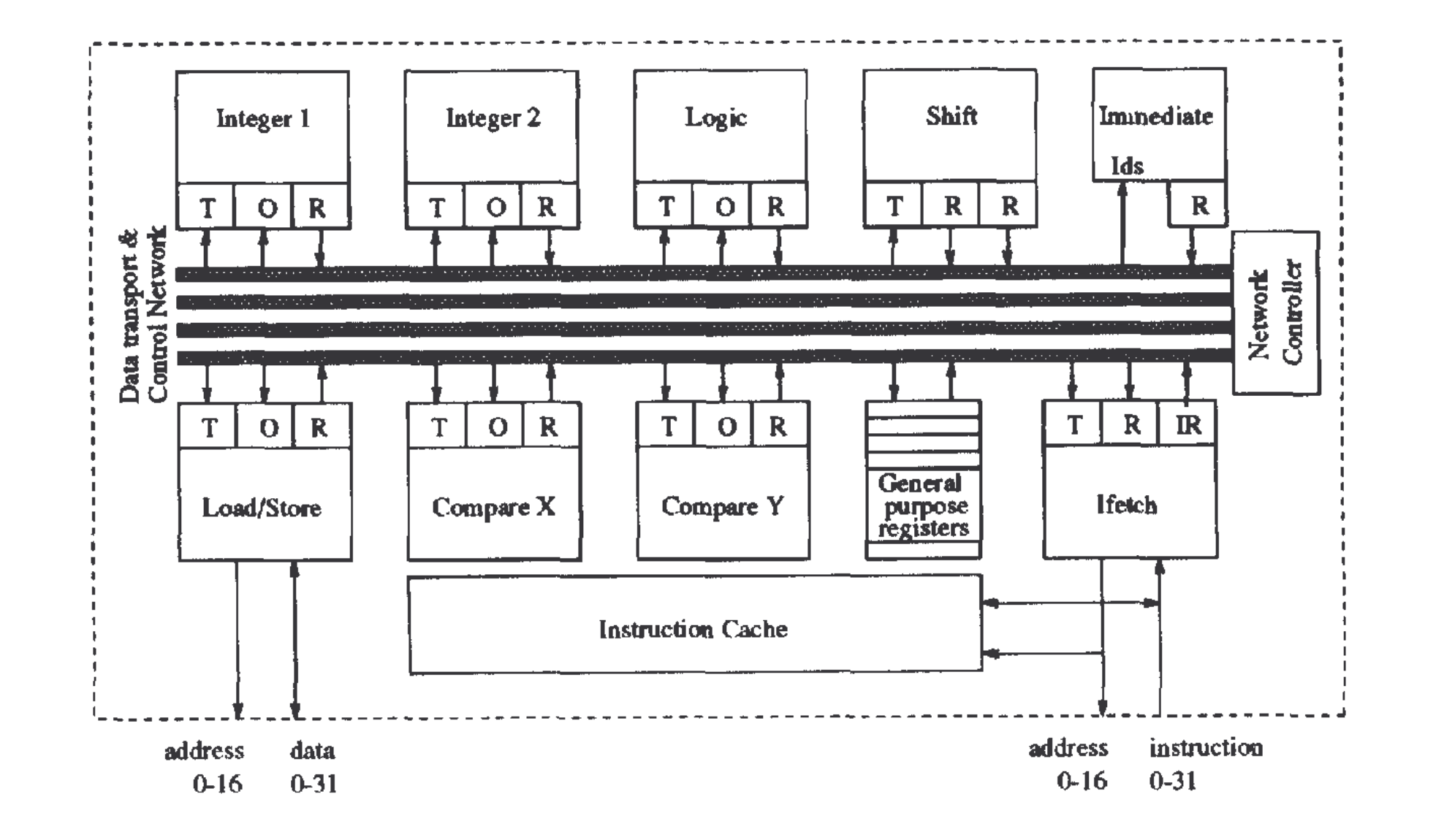 After looking through this, it sounds like a Function Unit (FU) implements all the "primary" logic, and so hides implementation detail. So you can have an "ADD" FU, and that is some complex circuit. Would like to know if I am understanding this part correctly. My question then would be if the single MOVE instruction could be used to create all the Function Units, or if not, why not.

In looking through some papers on Transport Triggered Architectures (TTA), I've noticed they are calling it an OISC (One-Instruction Set Computer), even though the Function Units (FU) might implement complex logic outside of the TTA. This means to me it's not really a OISC. It's like saying that x86 is a OISC if you just think of all operations as being of the form APPLY name, arg1, arg2, arg3. So I'm wondering if there are any examples of creating the FU components using the TTA, so that it would really be a one instruction set architecture. Or if not, why not, I'd be wondering then what you can't model or implement just using the MOVE instruction. But this is just tangential..

The main question is, given all logic gates can be assembled from NAND gates, if the Functional Units (FU) in a TTA can be built using the TTA itself, starting with implementing a NAND gate in the TTA directly somehow.

The question is not very clear, but I will attempt to answer.

The TTA is an OISC from the perspective of the CPU designer, if not the CPU user.

CPUs built with other architectures require a LOT of administrative machinery to support decoding, scheduling, and synchronization of different opcodes - and all this machinery acts differently depending on the opcode, and has to be designed and tested thoroughly for all the possible sequences of opcodes (or formally proven to work).

The TTA CPU is factored into two (unequal) parts - a generic one fetching the next MOVE instruction and interpreting it, vs. a variable number of FUs. The main benefit of this factoring is separate development and testing - you can (relatively) easily add or remove FUs without touching the MOVE interpreter. Adding or removing opcodes in other architectures is a major redesign task.

I understand how the OISC branding may seem like cheating or a marketing gimmick, but in reality it's a great way to achieve flexibility during CPU implementation (which is extremely useful in some approaches, e.g., when the CPU is custom for the application).

Regarding NAND: you could probably build a CPU where NAND is the "main" FU, though it would likely to be a pretty inefficient design (and you would still need a few additional FUs for data memory access, register banks, instruction pointer, etc.). A more practical approach would be selecting the FUs based on your application (so if you need to do a lot of floating point divisions, add an FU for that).

3
What counts as a pipeline?
16
How is a program executed at the CPU level?
0
why are WAW and WAR hazards not possible in mips architecture
0
MIPS CPU (Single Cycle MIPS Processor)-R Type instruction ALUOp code confusion
1
Pipelining and instruction cycle
1
What is memory model in computer organization?
0
Machine has 64 bit architecture and two word long instruction
0
What will a given CPU architecture do in the event that we were to invert all of the instruction bits to a given instruction?