I am struggling with the Pseudo code for an that algorithm assigns "least filled slot first" to a tasks on multi-core chip.

So far I have written following: 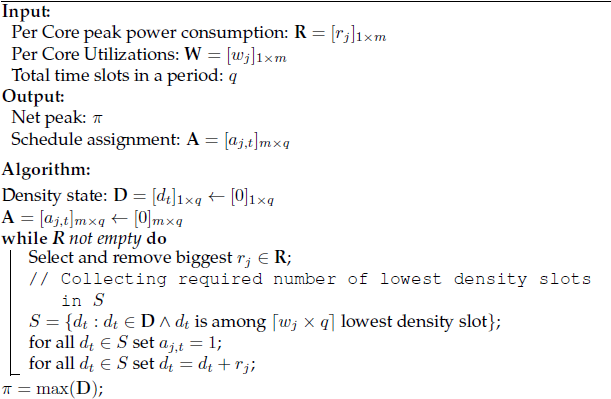 In general, I know its a trade-off between readability vs complexity. Generally, the main purpose of presenting an algorithm is to make it readable and leave the implementation details to the implementer. But just to be pedantic ..

For example, you could write the following naming choices.

How to write pseudocode?

It occurs to me that the pseudocode in the question might be even harder to understand than the actual code had it been implemented in most programming languages that I use.

Whenever you are writing pseudocode, imagine that you are telling the target audience how the algorithm works. Have you made it easier for them to understand the algorithm fully and correctly?

I think it would be perfectly reasonable and normal to present the pseudocode as is, and to mention in the accompanying text that if you sort $R$ in advance, you can implement this algorithm in $O(m \log m)$ time. I think it's pretty clear how to implement the selection step, and you don't need to write out all the indices to explain.

Not the answer you're looking for? Browse other questions tagged algorithms time-complexity or ask your own question.

1
What is the meaning of this pseudo-code function?
1
Order of a pseudo code
3
Time complexity of this solution to N-queens problem
2
Pseudo code algorithm for beauty contestant question
2
LPA* implementation keeps looping
5
Is there a name and efficient algorithm for this Tree Traversal method?
2
Largest rectangle problem
0
What time complexity (big o) is this specific web crawler implementation?