After many years, I have been revisiting the venerable old Halting Problem and the self-referential / diagonalization “party trick” that shows that there is no Turing Machine able to solve it.

I was bothered by the fact that it was, and continues to be, stated in an untyped manner, and thus is a bit sloppy for my tastes.

Let's call HALTP be the (actually, "an") always-halting Turing Machine (TM) which can decide whether a pair [Turing Machine, Input] is a combination that halts (the P is coming from the P convention.)

Now, we implement “typing” in as follows:

We add “type judgements” to our Turing Machine description toolset. Type judgements are not found on tapes, they are part of the specification of TMs.

We assume that when a TM is run on input <w>, i.e. when we compute TM(<w>), the TM performs a type check and decides whether <w> passes all type judgements given in its definition. If <w> does not pass, the TM outputs ⚠ on the ✇O and halts.

So, we suppose that there is a TM called HALTP with obeys the following specification:

Otherwise, we expect flawless performance and halt-in-all cases and:

In the diagonalization approach, we feed <HALTP> to HALTP (actually <the complement of HALTP> to HALTP, but let’s keep going). So let’s try that here:

Does HALTP halt on input x?

<x> must evidently be something that can be given to the TM represented by the first argument i.e. HALTP, otherwise this call is entirely meaningless.

so we need to actually call HALTP like this, as we want to call HALTP on HALTP:

Does HALTP halt on input itself on input x?

<x> must evidently be something that can be given to the TM represented by the second argument i.e. HALTP, otherwise this call is entirely meaningless.

so we really need:

and so on ad infinitum.

The effort to build a meaningful argument to HALTP seems to fail due to an infinite regress and the question "what happens if we give HALTP to HALTP" does not make sense because giving HALTP to HALTP is nonsensical.

The textbook proof seems to absolutely ignore this problem, it assumes that calling

How to to fix that? 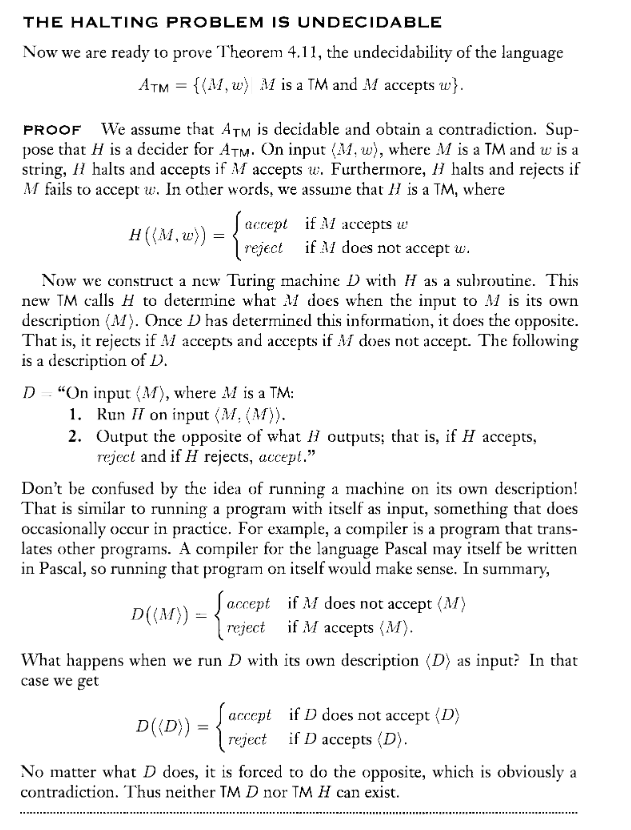 Not the answer you're looking for? Browse other questions tagged turing-machines halting-problem or ask your own question.

7
How is Turing's Solution to the Halting Problem Not Simply “Failure By Design”?