How does paxos algorithm handle partial failures of accept messages?

I've been reading the basic paxos algorithm from the "Paxos Made Simple" paper. I can't understand how paxos algorithm maintains the safety properties under partial failures of the accept messages, meaning cases where the proposer receives prepare responses from a majority, but the subsequent accept message does not reach all the acceptors. It seems to me this could lead in a violation of the safety properties, where there will be no majority that has agreed on the same value.

I created a contrived example of the use-case I am thinking about. In every round, the proposer sends a prepare message to a majority of nodes, gets a response from all of them, but then the accept message arrives only to one of them (the other ones get lost). More specifically, as shown in the image below: 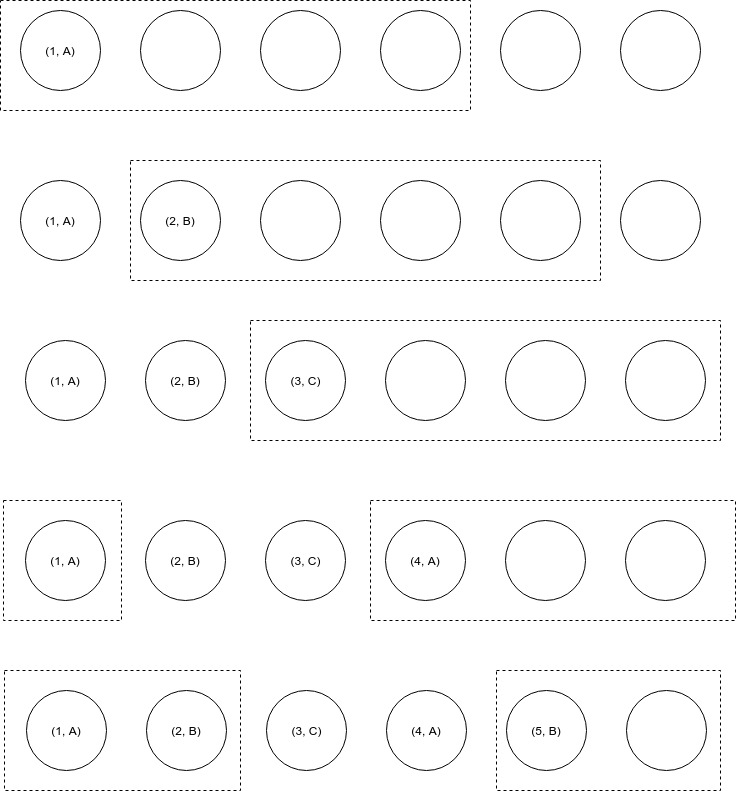 At this point, there is no way to satisfy the safety property, since we would need a majority (6/2 + 1 = 4) of acceptors to have accepted the same value.

Where is the flaw in my thinking ?

The paper's specification for the phase 2(b) of the algorithm, which is how an acceptor responds to an accept message is the following:

If an acceptor receives an accept request for a proposal numbered n, it accepts the proposal unless it has already responded to a prepare request having a number greater than n.

This means that acceptors are allowed to accept multiple proposals (even with different values) in a single instance of Paxos, as long as they have not responded to a prepare request with a number greater than the number of the accept message. As a result, even after the last row of the example, a proposer could bring the system to an agreement, by making some of the nodes accept a different value.

For example, the proposer could send a subsequent prepare(6) message to nodes 1,2,5,6, followed by an accept(6, B) that reaches everyone, thus reaching a majority and concluding the consensus. The important thing to note is that after this point, it's impossible to form a majority with a different value, because any potential majority quorum would contain at least one node returning (6, B) during the prepare phase.

Not the answer you're looking for? Browse other questions tagged distributed-systems consensus or ask your own question.

3
Why does a prepare message wants a promise that an acceptor is never to accept a proposal numbered less than its propose sequence value? (Paxos)
2
How do we make sure in Paxos that we don't propose a different value if a majority has formed?
0
How does Paxos maintain the promise that future proposal will not break the current chosen value without knowing the future?
2
Why does an acceptor send the highest numbered proposal with number less than n as a response to prepare(n) in paxos?
4
Paxos: Accepting Proposals With Different Values and Consensus in Paxos
3
Paxos: Responding to Reordered Prepare Requests
3
Paxos: Instances, Rounds, Phases
3
Why does the proposer sends an accept request with the same value it got from the acceptor?