Are all $n$-vertex regular graphs of degree $d$ isomorphic?

Playing around with a pencil and paper for a few minutes, it should be easy to come up with non-isomorphic $d$-regular graphs with the same number of vertices, for small $d$. For example, take two cycles of length $2n$ and connect chords across them in different ways.

Consider, for example, the cycle $C_6$ with six vertices and the graph obtained by the union of two copies of $C_3$. Then both are 2-regular, but they are obviously not isomorphic.

This is also the case if we restrict the question to connected graphs. Consider, for instance, the following two 3-regular graphs: 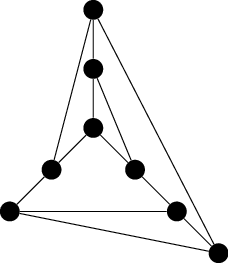 You can see they are not isomorphic because the second one contains cycles with six vertices that have chords; this is impossible in the first graph since it has precisely four six-cycles and you can see none of them have chords. (Or even easier: The second one has a five cycle, whereas the first one has only cycles with three, four, six, or more vertices.)

What you might be able to prove is that all 2-regular and connected graphs are isomorphic (see, e.g., this), but this is a big restriction compared to the original question.

Not the answer you're looking for? Browse other questions tagged graphs graph-isomorphism or ask your own question.

34
Enumerate all non-isomorphic graphs of a certain size
0
To detect isomorphic graphs Is it enough to check if they have the same number of same degree vertices?
5
How similar is the Goldwasser-Sipser Set Lower Bound Protocol to the Hashcash/Bitcoin Proof-of-Work?
1
Proof that locality is sufficient in showing two graphs are isomorphic
0
Analyze undirected weight graph and generate two sub graphs
10
How to define a similarity between two graphs?
2
Prove that up to isomorphism there are exactly two graphs s.t. there at most two vertices with same degree