Tried to research here and on other sites with no luck regarding finding the maximal and average number of time slots in an Adaptive tree walk protocol. i'll explain what i mean here:

In a simple(provided an image for illustration at the end of the post) Adaptive tree walk protocol, Divided by time slots where a station can only transmit at the beginning of each time slot.

If for instance stations C and A want to broadcast in time t=0 with probability p(for simplicity) (None of the other stations want to transmit at all), Is it possible to know the maximal or average number of time slots that will pass until(including) the slot in which there will be a successful broadcast?

Simple network diagram i am asking about: 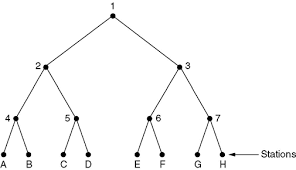 Note: for simplicity, in this question, no other station except C and A want to broadcast at all

It is clear that you cannot know the maximum if $p \neq 1$, because there is always some chance, no matter how small, that neither station will transmit after any $n$ attempts.

Not the answer you're looking for? Browse other questions tagged computer-networks communication-protocols protocols network-analysis or ask your own question.

1
Average number of slots needed in slotted-Aloha
1
Probability of Success in Slotted Medium Access
0
What is the actual formula for the efficiency in CSMA/CD?