PERT Chart exercise - is there enough information to solve?

I'm posting this here as my question is from a computer science textbook. It is not a homework question as I am self-studying and I have the answers available.

In the exercise below, I can't see how I'm supposed to know which activity to place on which arrow. I can't tell if there is insufficient information provided or if it is a lack of understanding on my part which makes it impossible to decide which arrow out of node 2 should have be labelled B and which with C for example.

If it is solvable given the information provided, could someone please exaplain the method? 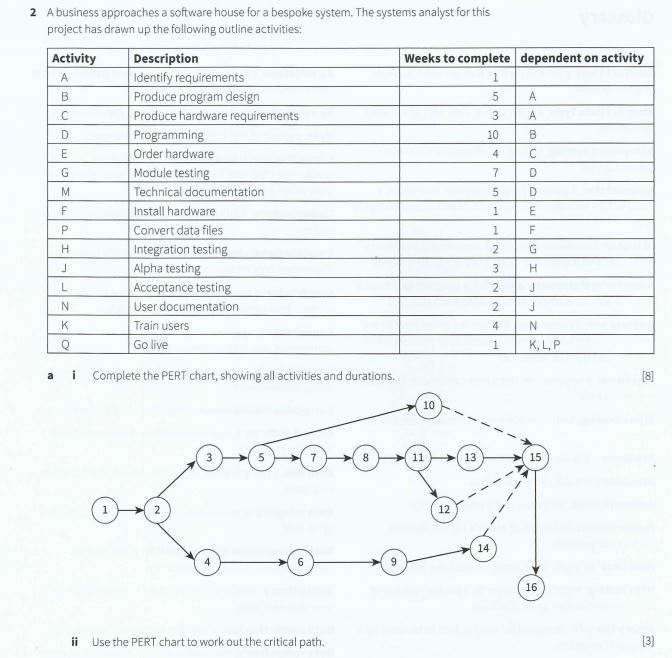 I don't know if there is a standard method to identify which activity matches which arrow, but I was able to complete your PERT chart by examining a few possible cases, while filling the chart from left to right. Each case was accepted or rejected after a while. I found that the higher arrow matches B and the lower C. Note that if you try to match C with the higher arrow, (2,3), E will match with the (3,5) arrow but then you will face the problem that only one activity depends on E while there are two arrows starting from it that have to be filled. Otherwise, if you match (2,3) with B, (3,5) will match with D and then there are two acivities dependent from D as you wish. More uncertainties will raise but they are solvable by considering the different cases.

So the information provided are enough to solve the excersise. One possible typing error that I identify in the problem statement is that Q doesn't depend on K, L and P only, but it depeds on M too. That's why there are four arrows entering node 15 instead of three. Otherwise there is no lack of information and you can solve the problem as I described above.

Both methods will lead to a correct solution, you can try them for practice.

Not the answer you're looking for? Browse other questions tagged network-analysis or ask your own question.

4
Is there a name for the problem of turning a bipartite graph into two graphs?