ε-NFA to DFA - initial state with only epsilon transitions 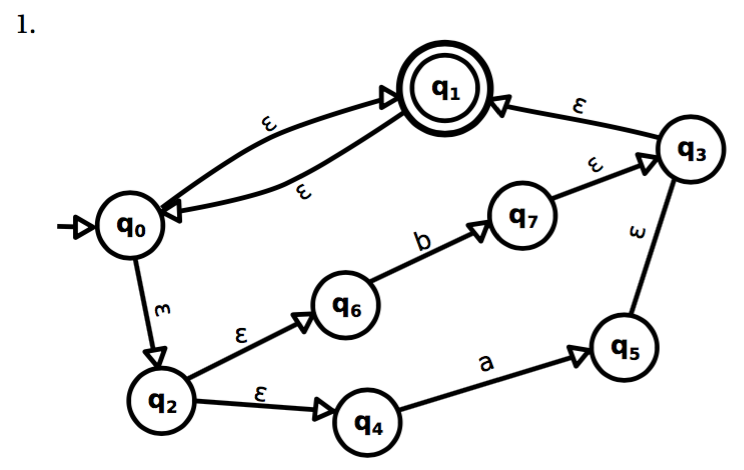 Here is an algorithm to convert an $\epsilon$-NFA to an equivalent DFA.

Let the $\epsilon$-NFA consist of a set of states $Q$, an initial state $q_0$, a set of accepting states $F$, and a transition function. We construct a DFA on the set of states $2^Q$ (the power set of $Q$). The initial state is the $\epsilon$-closure of $q_0$ (the set of all states in $Q$ reachable from $q_0$ by a path of $\epsilon$-transitions). A state is accepting if it intersects $F$. We define the transition function $\delta$ as follows: given a state $S \in 2^Q$ and a letter $a$, $\delta(S,a)$ consists of all states in $Q$ reachable from a state in $S$ by taking an $a$-transition followed by a path of $\epsilon$-transitions.

2
Newbie Random NFA DFA questions
2
NFA-epsilon: epsilon loops, and how do I deal with them?
1
How to convert this DFA with multiple final states to a regular expression? (State elimination method)
2
The order of ε-transitions in NFA
2
Polynomial-time Compute the Number of States resulting from the NFA to DFA (greedy) conversion?
3
Arden's Rule, DFA & NFA to regular expressions
1
Conversion of $\epsilon$-NFA to a DFA