There could also be directed edges between nodes in partitions $m$ and $n$ where $1 \leq m, n \leq k, m \lt n, n \neq (m+1)$, and labeled with a negative value. This is depicted in the following figure where there are two edges between partition $1$ and partition $3$ indicated with dashed lines. Non adjacent partitions do not form complete bipartite graphs. They only comprise edges as indicated. In the figure, the edge labels are shown with negative values, wherever edges are not labeled with values, they are labeled with $0$ by default. 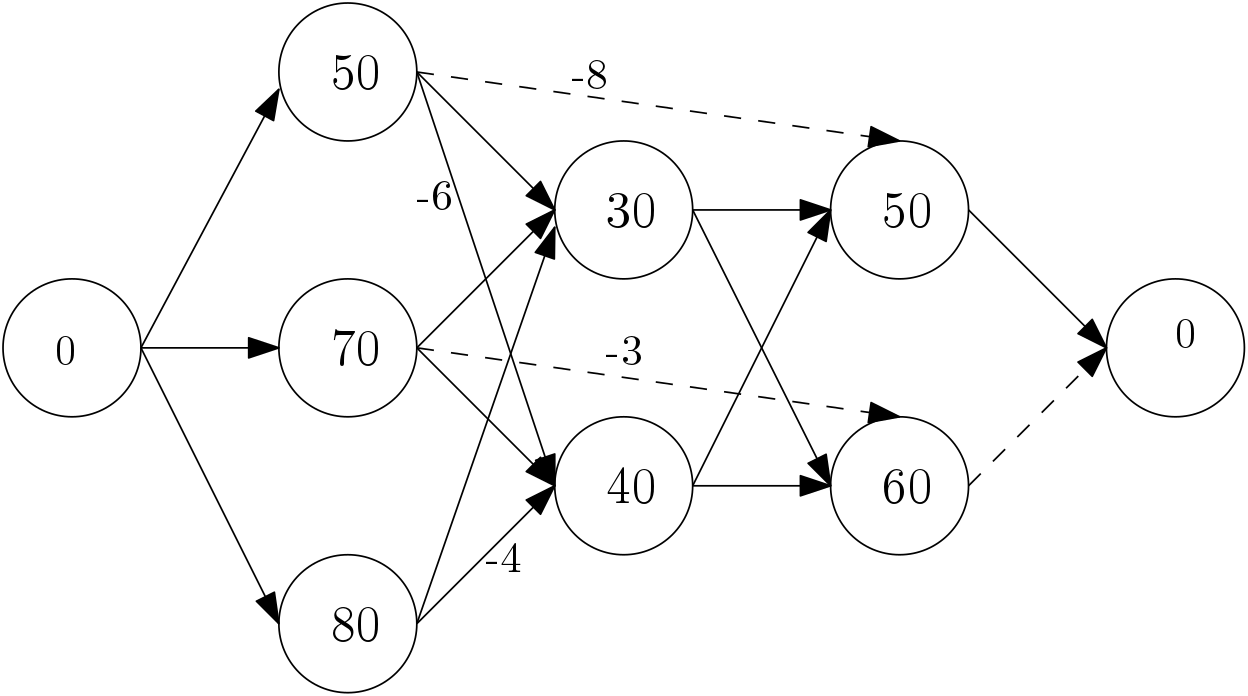 Find the shortest path from $s$ to $t$ taking exactly one vertex from each $k$-partition where the length would be calculated as described.

Attempt : I converted the node weights for a pair $(a, b)$ into edge weights where each edge weight would be the sum of the node value of $b$ deducting the edge cost between $a$ and $b$. This works for edges between successive partitions and produces the correct shortest path in cases where the edges are only between such. However, if I use the same approach for edges between different non successive layers it doesn't work. What would be an algorithm to find the shortest path and the transformation?

Your problem is NP-hard, by reduction from clique. Given a graph $G=(V,E)$ and a number $k$, we construct a graph with $k$ internal layers, each containing $|V|$ vertices. All vertices in a layer are connected to all vertices in the following layer. The weight of an edge is $0$ if the corresponding edge is not in $G$, and $-1$ otherwise. We also add shortcut edges corresponding to edges in $G$ with weight $-1$. The graph $G$ has a $k$-clique iff the shortest path in the new graph has length $-k(k-1)/2$.

Not the answer you're looking for? Browse other questions tagged algorithms data-structures search-algorithms shortest-path or ask your own question.