I wonder about the following decision problem :

Question: is it possible to cover all the ones of the matrix with $N$ squares of side length $k$?

It is possible that the squares cover some of the zeros in the matrix, and they can overlap with each other.

I get the impression that it is $\textsf{NP}$-complete (it is clearly $\textsf{NP}$), I find some similarities with Grid covering by rectangles but can't find a good reduction.

EDIT: After days of reflexion, these are the ideas I've got:

I try to create a reduction from a Satisfiability problem with the following approach.

Here's a visual representation of the matrix: 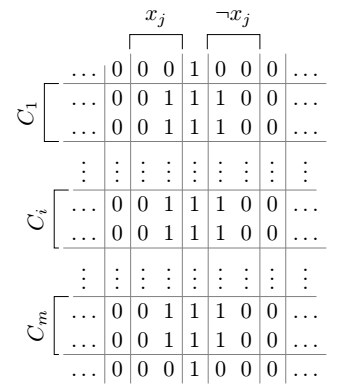 If we then allow the use of $2n-1$ squares for each clause $C_i$, we need one of the variables to be set correctly in the clause to cover all ones in lines $2i-1$ and $2i$. The problem with this reduction is that you can "gain" some squares in a clause with multiples variables set correctly to change the disposition of a variable elsewhere.

My second idea was to create a reduction from $\texttt{ONE-IN-THREE-SAT}$, in which we ask if there is an assignation to $\varphi$ which satisfies exactly one litteral per clause, or even its restriction where we can suppose that $\varphi$ contains no negations, but I couldn't find something satisfying, so I'd like some help again!

Browse other questions tagged complexity-theory np-complete np matrix or ask your own question.

5
0/1 Integer Programming and Karp's Reduction
1
3-SAT to Max-2-SAT Reduction
0
Validity of reduction (3-SAT)
7
What is the trick of “adding a huge number” for in the reduction from 3-Partition?
15
Grid covering by rectangles
2
Is this problem about picking optimal entries of a matrix NP-complete?
8
Why doesn't Godel's Second Incompleteness Theorem rule out a formalizable proof of P!=NP?
1
Is properly quantified 3SAT complete for PSPACE and all PH levels?
1
For given reduction f, can show “if f(x) in 4NAE then x in 3SAT”, but not “if x is not in 3SAT then f(x) not in 4NAE”
1
Is Monotone 3-SAT with exactly 3 distinct variables untractable?