Assume I have a undirected graph $G$ without cycles (i.e., a forest) and I am provided with pair of nodes $a$ and $b$.

How can I find the total number of paths in the graph that do not share any edge with the (unique) path from $a$ to $b$ and have only one vertex in common with it?

For example, suppose I have following graph : 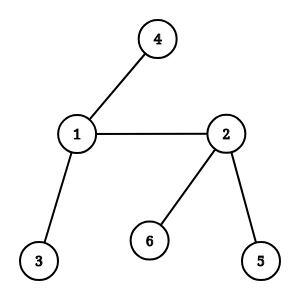 Let's take $T$, one of these tree containing the vertex $a$ of the given path and a total of $n$ vertices. You want to compute the number of different paths passing through $a$. There are two possibilities:

To answer your question, just sum all the trees' number of paths.

Not the answer you're looking for? Browse other questions tagged algorithms graphs trees or ask your own question.

16
Prove that every two longest paths have at least one vertex in common
5
Path in a graph with a given xor of weights of edges
7
Check if there is only one simple path in graph between nodes x and y`
1
How to minimally extend a digraph such that all nodes are on a cycle?
1
Minimum path cover--- Disjointed paths with minimum total number of edges
3
Finding paths with minimum intersections
2
Given all pairs shortest paths matrix, find graph with minimum total sum of edges
0
How to find the shortest route between (0,0) and (4,4) in a 5x5 matrix, given one horizontal or vertical translation per step
1
How to find the smallest of the maximum edges of all paths between two nodes in a graph