Let's suppose that we have the following 2 tables: 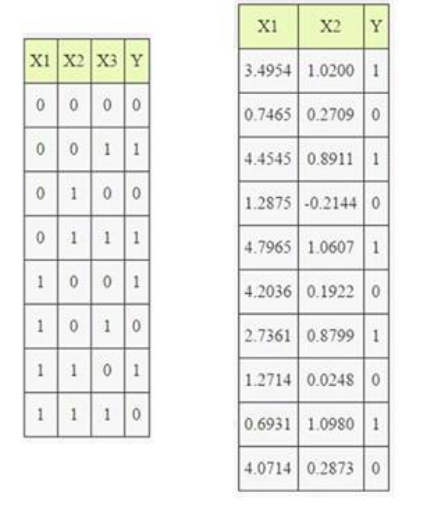 If we want to reduce the dimension by one(in every table) which feature we should remove and why ?

I am confused about the way that i should work generally in this type of problems.

In the first table, X2 is an unnecessary feature. You can check that for any row, the value of Y that you obtain after reversing the value of X2 is always unaffected. Instead, X1 and X3 are both individually necessary; this can be seen for example by comparing the first row with the fifth row (for X1) and with the second row (for X3).

In the second table, X1 is an unnecessary feature. The value of Y is solely determined by whether X2 is large or small; say, larger or smaller than 0.5. Hence a linear classifier based on X2 can predict Y with full accuracy. Instead, no linear classifier based on X1 only can correctly predict Y; for example, the value of Y is 1 for X1=0.6931, becomes 0 for X1=0.7465, and becomes 1 again for X1=2.7361.

For the first type of problem, you can look at each feature individually and check whether the results indeed depend on it or not, by comparing corresponding rows as I did in the example.

For the second type of problem, you can look for non-monotonicity (as I did in the example with the X1 feature), in which case you can exclude the non-monotone feature, at least if you are looking for a linear model.

Not the answer you're looking for? Browse other questions tagged machine-learning data-mining classification pattern-recognition or ask your own question.

11
Non-Parametric Methods Like K-Nearest-Neighbours in High Dimensional Feature Space
0
Understanding non-linear dimensionality reduction algorithm (locally linear embedding)
2
Feature values range
2
Simple majority classifier question
3
Do I have the right definition of VC dimension?
0
How to understand a equation related to speaker recognition?
1
Why is it not always possible to compute the centroid of feature vectors?