How to find an algorithm's complexity from actual running times

I have a certain algorithm which I can run, but I do not have access to its code. Thus, it works as a black box. I would like to now the order of complexity of this algorithm on a certain set of instances, which grow in size as a function of $n$.

I have plotted my data using Python and I have made some simple regression (exponential, cuadratic, cubic...), but I still can't get to decide which function best fits the algorithm. Obviously, if I try regression with a polynomial of higher degree, I will get a tighter curve, so in case the running time is a polynomial in $n$, I don't know how I could decide which is the one that really fits. 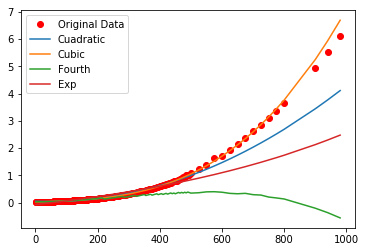 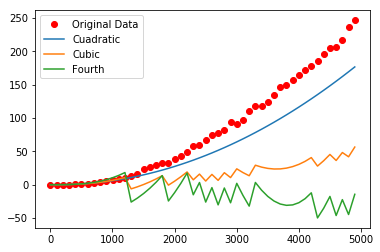 (in addition, I feel there is something off with float point calculations, as two of the curves below get really messy)

A bit of context: I am working on a particular class of hard Quantified Boolean Formulas (QBF) and I want to test their running times on different available QBF-solvers. These formulas verify a certain interesting property: they have linear size proofs in the QU-resolution proof system. However, QBF-solvers act as block boxes for me, and, altough I can see from data that they do not have the "predicted" linear running times, I would like to know how is the growth in complexity in these particular instances. Particularly, it would be great to give some approximate bound or even confirm that they do not seem to have an exponential growth. Thanks.

You can do regression on the whole data to get a better fit.

Not the answer you're looking for? Browse other questions tagged time-complexity asymptotics runtime-analysis or ask your own question.

25
How to fool the plot inspection heuristic?

16
Are asymptotic lower bounds relevant to cryptography?
3
Compare asymptotic WC runtime with measured AC runtime
4
How to determine if a black-box is polynomial or exponential
0
Psedu-polynomial Time : Conflict with the definition of input size
3
Practical hard 3-sat instances
1
Asymptotic analysis for machine learning algorithms
1
Time complexities of state-of-the-art SAT solvers with respect to length of the formula
0
Differences between Polynomial and fully polynomial time approximation scheme