Does the Hack computer from "The Elements of Computing Systems" use Von Neumann architecture?

With that distinction between instruction memory and data memory, is it really a von Neumann architecture? According to my understanding of the difference between von Neumann and Harvard, that description sounds much more like a Harvard architecture.

I had the same suspicion going through the Nand to Tetris course.

Indeed, if you look at John K. Bennett's annotated version of "The Elements of Computing Systems", specifically Chapter 5, he calls this out:

The Hack architecture would more properly be called a “Harvard Architecture,” since the data and instruction memories are separate.

We can also do some digging for ourselves.

If we consult Wikipedia, it states that the Harvard architecture is distinguished by:

The term "von Neumann architecture" has evolved to mean any stored-program computer in which an instruction fetch and a data operation cannot occur at the same time because they share a common bus.

The latter is indeed the architecture of the Hack machine, which has two separate memories and can do an instruction lookup, data lookup, and computation all in one step* of the CPU. You can see this in the book's diagram: 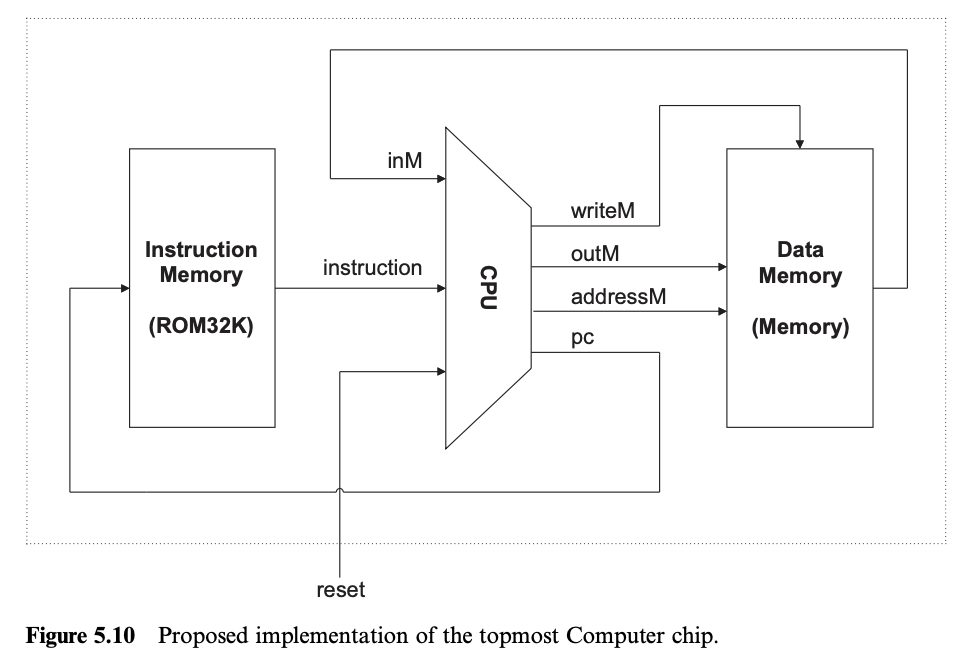 Last, this is also explicitly stated at the end of Chapter 5 of the original book:

*Note: In the Hack machine language, it actually takes two steps (e.g. @dataaddr then D = M + 1) to do an operation on data in memory. However, during the second instruction, both the instruction and the data in memory can be read by the CPU simultaneously.

This is rather surprising.

If we look at the specification of the Hack Computer, I found this (consistent with your query):

Also, I've been studying Computer Architecture- MIPS-64 bit by Hennessy, which is based on von Neumann's, like most of the general-purpose computers in the mainstream. Harvard machines are generally specialty products. But there has been an increasing number of machines with Harvard-Neumann's Hybrid. These are the highlighted points which provides a reason:

So, it's fairly safe to assume the conundrum of The Hack being a von Neumann one.

Not the answer you're looking for? Browse other questions tagged terminology computer-architecture or ask your own question.