Is it NP hard to decide whether a given Hidoku is solvable? What reduction could be used?

Edit: according to the comments, I give a little clarification. Given is a grid of cells, some of them already contain values (integers from 1 to n²). We must fill all remaining cells with integers from 1 to $n^2$, such that no two cells have the same value and that every cell with value $z ≠ n²$ has a neighbor with value $z + 1$. That is, after filling out the cells, we must find the path $1, 2, 3,\cdots, n^2$. In the grid, which logically visits each cell.

An example of a Hidoku woud be http://www.janko.at/Raetsel/Hidoku/018.c.gif. An already solved Hidoku is http://diepresse.com/images/uploads/3/f/7/586743/spectrumsommerraetsel_7august_hidoku_schwer_loesung20100810172340.gif, where you can see the path I was refering to.

complexity-theory reductions np-hard
Share
Improve this question
edited May 6, 2013 at 22:36 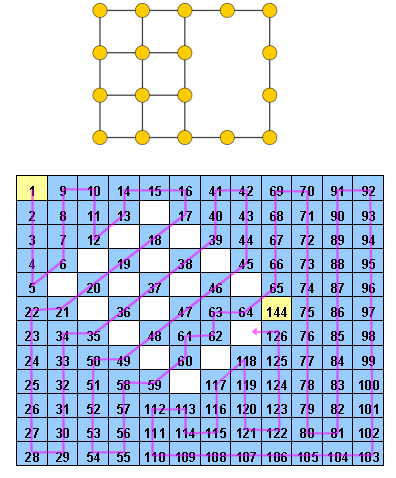 Auxiliary (filled) lines can be added to the bottom or right side to make it a square.

Another example of reduction from a grid graph to an Hidoku puzzle: the 6x4 grid graph is embedded in a larger 13x13 grid; the even diagonals are filled with fixed numbers, and the remaining free cells are equivalent to the original grid graph. 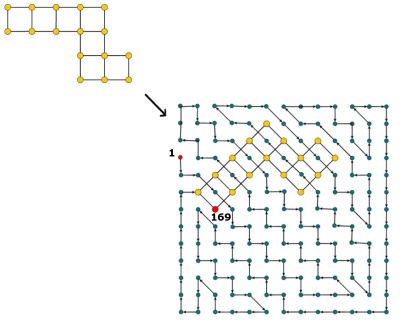 The full picture with transformation can be downloaded here.

Some additional notes to complete the answer:

In summary, if we drop the unique solution constraint and specify the initial board with a list of $n^2$ integers the game is $\sf{NP}$-complete.

One subtle catch: while I think that Vor's answer does a pretty good job of explaining why it would be NP-hard, it's not immediately clear that the problem is in NP, depending on what you define as the input size! Note that the problem specification for an $n\times n$ grid doesn't actually have to be of size $\Omega(n)$; it consists of the integer $n$ (of size $\lg n$) and some number of triplets of integers $(x_i, y_i, w_i): x_i, y_i\leq n, w_i\leq n^2$ saying that the cell with coordinates $(x_i, y_i)$ has value $w_i$; each of these triplets is of size $\lg n + \lg n + \lg n^2 = 4\lg n\in O(\lg n)$, so unless you have at least $\Omega(n)$ triplets of initial values specified then your total input size might actually be $o(n)$.

It's very possible that you need at least $\Omega(n)$ given cells to have a unique solution, and so any specification with less than that many givens can be rejected out of hand, but (a) that presumes you're asking about the 'unique solution' variant of the problem rather than the 'exists a solution' variant, and (b) it's not immediately obvious that even that restriction is true; I'm not sure how I would go about trying to prove it.

(For a discussion of similar issues, see my question of a while back on the complexity of succinct Nurikabe over on the cstheory.SE site.)

2
Disco Zoo Complexity
2
Why do puzzles like Masyu lie in NP?
15
Grid covering by rectangles
5
Building maze to maximize shortest path, may be given waypoints and teleports
0
Proving NP completeness of maximal length path
3
How to encode reachability in a graph with walls as a SAT problem
10
Algorithm to create dense style crossword puzzles
9
Is the leapfrog automata problem in P?