In my class a student asked whether all finite automata could be drawn without crossing edges (it seems all my examples did). Of course the answer is negative, the obvious automaton for the language $\{\; x\in\{a,b\}^* \mid \#_a(x)+2\#_b(x) \equiv 0 \mod 5 \;\}$ has the structure of $K_5$, the complete graph on five nodes. Yuval has shown a similar structure for a related language.

My question is the following: how do we show that every finite state automaton for this language is non-planar? With Myhill-Nerode like characterizations it probably can be established that the structure of the language is present in the diagram, but how do we make this precise?

And if that can be done, is there a characterization of "planar regular languages"?

It isn't true that every DFA for this language is non-planar: 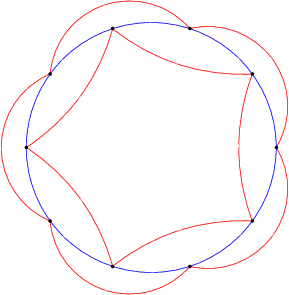 Here is a language that is truly non-planar: $$ \left\{ x \in \{\sigma_1,\ldots,\sigma_6\}^* \middle| \sum_{i=1}^6 i\#_{\sigma_i}(x) \equiv 0 \pmod 7 \right\}. $$ Take any planar FSA for this language. If we remove all unreachable states, we still get a planar graph. Each reachable state has six distinct outgoing edges, which contradicts the known fact that every planar graph has a vertex of degree at most five.

The concept has been researched before. (Once you know the answer, google for it ...)

First there is old work by Book and Chandra, with the following abstract.

The example and argumentation given is exactly the one by Yuval in his answer!

There is a 35-state inherently nonplanar deterministic automaton over a 2-letter alphabet.

This work is continued rather recently by Bonfante and Deloup. They consider topological embeddings. Informally the genus of a graph is the number of holes that have to be added to embed the graph a surface without crossing edges. Graphs with genus zero are planar. Then the genus of a language is the minimal genus of the automata for the language.

In the section "State-minimal automata versus genus-minimal automata" one finds the result, the proof of which is the first example given by Yuval (ten states to make the five state K5 language planar).

Proposition 7. There are deterministic automata with a genus strictly lower than the genus of their corresponding minimal automaton.

Not the answer you're looking for? Browse other questions tagged regular-languages finite-automata planar-graphs or ask your own question.

3
How to draw a clearly arranged DFA of a language with modulo rules?

11
How fast can we decide whether a given DFA is minimal?
4
Converting a non-planar graph to planar
2
Edge removal to convert a non-planar DAG to a planar DAG while maintaining reachability?
1
Regular Languages and Separating Suffixes