Can Dijkstra's algorithm outperform A star, in terms of vertices checked?

My intuition is yes, and I will show why. Consider the Figure underneath, in which we consider a large amount of discrete points in this plane, representing the vertices of the graph, and connecting arcs with cost 1 between all adjacent points, creating a grid graph. Suppose the heuristic used by A star is euclidean distance, and suppose many curved walls like the ones I drew in the middle exist in this fashion, not only the three I drew. A star in this situation would be "tricked" to go in between the walls, since the heuristic would guide it close to the point, only to find out it's a dead end (or a local optimum of some sorts if you will), and this would happen as many times as there are walls. Dijkstra would not be tricked this way. The only problem with my example here, is that Dijkstra will probably not outperform A star here. So, is my intuition wrong, or do more clever instances than this one exist in which Dijkstra can in fact outperform A star in terms of vertices checked? 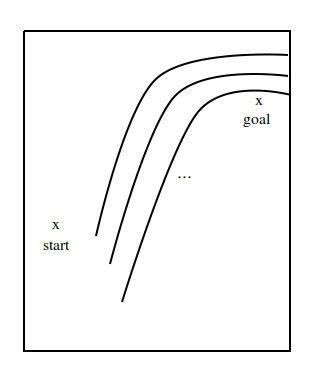 Thus if the heuristic is always positive then A* will expand less or equal nodes.

Not the answer you're looking for? Browse other questions tagged algorithms search-algorithms a-star-search or ask your own question.

4
Algorithm to Group Vertices of Graph
1
Computing the k shortest edge-disjoint paths on a weighted graph
15
Dijkstra's algorithm on huge graphs
4
Where does the heuristic come from in the A-star algorithm and how do we know it has the right properties?
0
Dijkstra's shortest path algorithm without relaxation
1
Why is Dijkstra's Algorithm more popular compared to Grassfire algorithm?
3
Performance of Modified Dijkstra's algorithm with Binariy heap as Priority Queue
0
Coefficients in cost function in A-star
5
How can I determine if two vertices on a polygon are consecutive?