How to effectively represent and generate 2D cellular automaton rules that are invariant under rotation and reflection of the input matrix?

Consider cellular automaton rules for a two-dimensional universe with two states, where a cell's new state can depend on its previous state and the states of the cells in its Moore neighborhood. Such a rule can be modeled as a function that takes as input a 3 by 3 matrix of bits, and outputs a bit.

Such a rule can be represented easily using a string of 512 bits representing the output for each of the $2^{3 \times 3}$ input states. Since this representation is bijective, a rule can also be randomly generated by sampling 512 bits.

However, it is sometimes preferable for reasons of aesthetics and comprehensibility that the output of the rule be the same when the input matrix is rotated or flipped horizontally or vertically. The rule for Conway's Game of Life is an example of a function satisfying this restriction.

Given a function $r : 2^9 \to 2$ which does not necessarily obey this restriction, we can obtain a function that does by mapping the input to the lexicographically smallest matrix obtainable by reflecting or rotating it before passing to $r$. However, this provides little insight into the questions I am interested in:

I won't go into the details of your specific case but try to answer the general problem.

In the unrestricted case there is a mapping from each of the $n$ (=512) input states to one of 2 output states and you want to restrict the function as follows:

Answering your questions should then be easy:

You seem to be looking to enumerate (and/or randomly sample from) the set of isotropic two-state two-dimensional cellular automata on the Moore neighborhood.

As far as I know, there's no obvious "elegant" way to find these equivalence classes other than by a brute force exhaustive search. Fortunately, this tedious work has already been done, and a list of all the $2 \times 51$ equivalence classes can be found e.g. on the wiki page I linked to above.

The page also describes a compact and somewhat human-readable notation developed by Alan Hensel for describing such rules, based on describing each equivalence class using the number of live cells in it (excluding the center cell) and a more or less arbitrary letter denoting the specific configuration of those cells, as shown in the table on the linked wiki page, and quoted below: 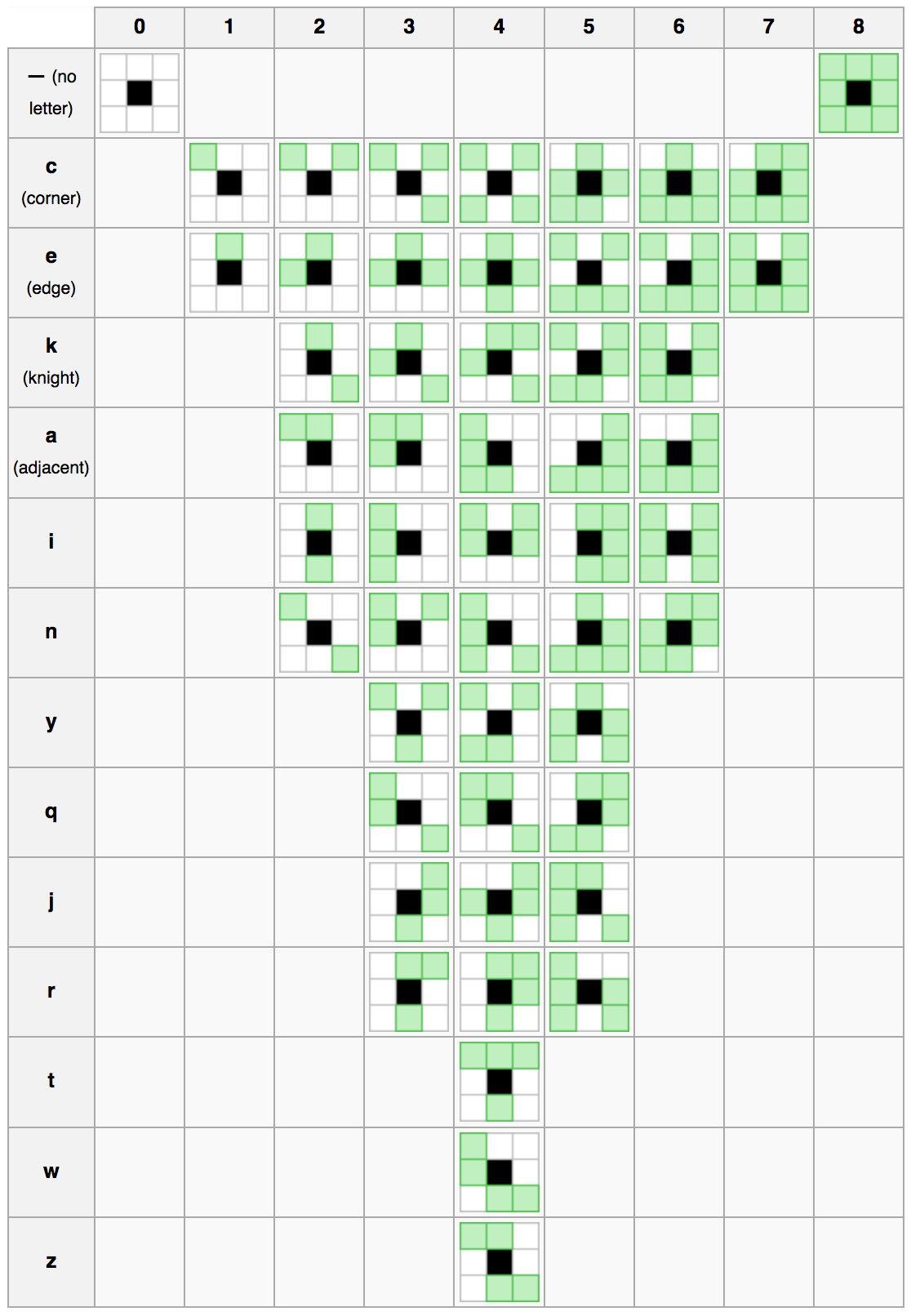 Several programs used for simulating and/or searching for patterns in Game of Life -like cellular automata, such as Golly, can parse rule strings in this notation.

Not the answer you're looking for? Browse other questions tagged data-structures optimization matrices cellular-automata or ask your own question.

1
Which cellular automata rules are suitable for randomizing an input sequence?
1
Algorithm to estimate the probability that a “0 and 1 matrix” fills up following the bootstrap percolation rules
3
How to find a path that connects all the dots in the matrix?