The following DFA recognizes the language containing either the substring $101$ or $010$. I need to prove this by using induction. 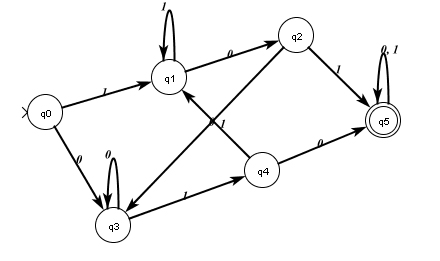 So far, I have managed to split each state up was follows:

q0: Nothing has been input yet.

q5: At least one of the two substrings has been seen.

Induction basis: The empty string does not have either of the substrings, so is correctly rejected.

But I am not too sure on how to proceed after this. I do not know how I should split the string up to prove that the $DFA$ is accurate.

If anyone knows how I should proceed with this, I would love some help!

The induction you probably want is to show that a string $w$ ends in state $q_i$ iff it satisfies the property associated to that state.

The basis then is that the empty string, which must end in $q_0$, satisfies the property there.

You should be more precise in some of your properties. In $q_4$, the string ends in 01 as you state, but has never seen any of the special strings, in particular it did not end in 101.

Not the answer you're looking for? Browse other questions tagged automata finite-automata induction or ask your own question.

20
How do I write a proof using induction on the length of the input string?

20
How do I write a proof using induction on the length of the input string?
4
Regular expression for the strings without a particular substring
3
DFA drawing for binary string with substrings of minimum length 3 with at least two zeroes in each substring
1
Prove correctness of DFA ending with ab
1
How to use the Pigeonhole Principle to prove a DFA has a minimum number of states?
2
Prove that a language is regular if it is accepted by a DFA with more than one intial state
4
How does one know what statements in Coq require Induction?
1
DFA & RE from descriptive definition of given regular language
1
Over the alphabet {a,b,c,d}, how would i construct a NFA that only accepts strings that end with a letter that is already part of the string?
0
Proof that $\{0|1\}^*0\{0|1\}^n$ requires at least $2^{n+1}$ states