The problem is, I think IT IS possible to construct such a dfa that has 3 states in total. 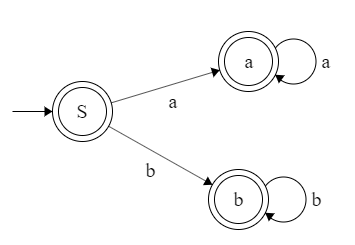 Am I missing something?

What you draw is an NFA, because you do not have both transition for $a$ and $b$ in two accept states. Indeed, you need 4 states at least. Because you have 4 different states:

Not the answer you're looking for? Browse other questions tagged automata regular-languages or ask your own question.