I'm looking at a worksheet that expresses boolean logic expressions using multiplication, addition, and apostrophes; something I've never seen before.

I can make a guess that the apostrophe is equivalent to ¬ (except it's suffixed instead of prefixed). But I'm not sure what the addition and multiplication of the variables/propositional atoms would mean. Furthermore, I don't know how a boolean logic formula can "output" something other than just a truth value...

This arose in the context of digital logic in terms of logic gates and such on a CPU, if that makes a difference.

An alleged truth table of the above two expressions (the first row is filled in as an example): 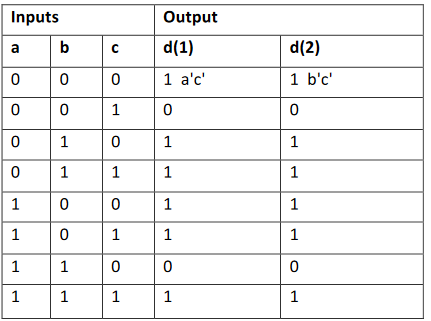 Not the answer you're looking for? Browse other questions tagged logic circuits boolean-algebra or ask your own question.