What goes into proving two complicated programs are equivalent?

Say I wanted to prove that two programs were equivalent (either rigorously if possible, or informally if not). More specifically, say I have something relatively complex such as an HTTP server implemented in C, and one implemented in Node.js/JavaScript. What can I do in terms of saying "these two are effectively the same"? What are my options? What is possible? What is not possible?

It's been a little while since I've looked into proving program equivalence (I'm currently linked to this, but I can't read it yet haha, and it looks like it's focusing on extremely simple programs like equality checks or basic loops, whereas I'm asking about a robust HTTP server).

Essentially (I'm imagining) I want to say "these two programs in JS and C do the same thing". That "do the same thing" is obviously vague, but at the same time it means something specific. Any observable outcome on either system is generally the same, give or take. So it's like a proof, but without being a perfect proof. It's like it's a partial proof or something.

I would like to be able to say of my programs "these two implementations are equivalent for all intents and purposes". I would probably start by providing measurable guarantees or observations about performance and input/output behavior, and then write some tests, and ... I don't quite remember, somehow make statements about the system. Or should I just be thinking that "a functioning HTTP server in either language is an AXIOM". That would simplify it :) Just assume it does the same thing as one another. But that's sidestepping it feels like.

Wondering what are my options here? How far can I take this in theory? I am not concerned with how long this would take to implement or define, if it takes years, fine. I just would like to know what is possible in terms of making the statement "these two programs in C and JS are equivalent" more rigorous and nailed down. What techniques/theories/research-directions could I look into to make it possible?

Right now I am just assuming they are equal implicitly, allowing my code to call either the C function or the JS function knowing that the ~overall effect~ is the same (nebulous, I know, don't know how to pin it down). I would like to apply some math or model checking or program simulation or something to this so that I can make it more solid, if possible :)

At the other end of the spectrum is proving that 3 > 2 is equivalent in both C and JS. What am I even supposed to do in this simple case? Making that slightly more complex on it's way to a full HTTP server, copying a string in C is very different than in JavaScript, but it's a relatively simple thing. Where do I even begin to prove those "operations" equivalent between the two languages? Or if not "prove", then just "state" that they are equivalent, with some backup evidence or something, I dunno.

Here is not much, but this diagram is what I'm basically trying to do: 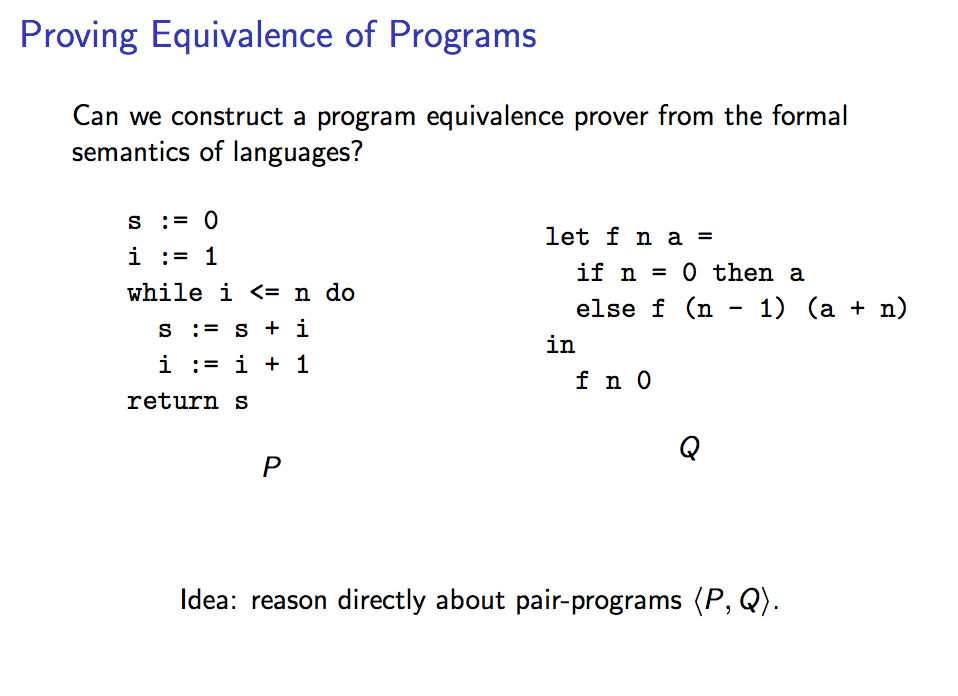 At a broader level, the problem seems to be similar to this.... Say I want to get a medallion. I can either go the store and buy one, or I can 3D print one. Both "algorithms" (going to the store, or 3D printing) are way different from each other, but they are effectively the same. There would be no straightforward way to step-wise prove these are equivalent operationally (from what my imagination provides), but visibly the end result is the same. How would you (even here) state this with rigor?

Formal analysis today is usually done on module or unit level. Unfortunately I'm not aware of a common metric which allows to predict if a formal analysis will be possible. Only structurally very simple codes can be formally analysed even with LOC's or cyclomatic complexities of up to a million.

In your case here the code of any of the two programs is clearly too complex for a full formal analysis:

So the best practical solution I know is model-based testing. While it is not a proof still formal methods can be used. It ultimately eliminates the disaster of writing and maintaining manually written test cases.

A short list of steps which can be done in this case:

One could write an entire book surveying techniques of proving program equivalence. This answer is just as a very short starting point:

Theoretically, if you think about your programs as Turing Machines, then all hope is lost -- proving that two TMs have the same language (i.e., they are semantically equivalent) is undecidable (in fact, it's not in RE$\cup$ coRE).

Still theoretically, if you think about your programs as finite state machines, by including the states of the memory as part of the machine, then program equivalence for DFAs is very simple (solvable in NL), and for NFAs it's PSPACE complete. The problem with this approach is that the state space would be huge (e.g., if you have only 100 bits of memory, your state space has at least $2^{100}$ states), so this is unreasonable.

Now that we've cleared the theoretical bounds, there is an immense body of work addressing these topics, including ways to define operational semantics.

Basically, this is the field of Formal Verification, and just some keywords that can get you started:

Note that in practice, many companies are formally verifying their code. For hardware, this is common practice, and is an important stage in development. For software, the huge complexity means that only small bits of code are getting proved formally, never entire programs (not yet, at least).

Not the answer you're looking for? Browse other questions tagged reference-request proof-techniques model-checking research or ask your own question.

8
How can I decide manually whether two CTL formulae are equivalent?
23
How to show two models of computation are equivalent?
4
What approaches are most useful when proving uncomputability of a given function?
5
Howto formally go about proving that two LTL formulas are equivalent?
4
How does lack of deadlock relate to computability in process calculi?
6
Why proving programs correctness doesn't have the same importance as algorithms analysis or the theory of computation in practice?
3
Does a Haskell program count as an inductive proof?
5
Are two CCS processes equivalent with respect to weak bisimilarity if and only if they satisfy exactly the same set of HML formulas?
3
How to prove that replacing a character in a string in both C and JavaScript is equivalent?