There are $2$ "basic"/"fundamental" data structures due to the way memory works:

Then there are ADT that we implement using those two, for example: stack, queue and more.

When we arrive to priority queue we first need to implement and ADT called heap which can be implement using: 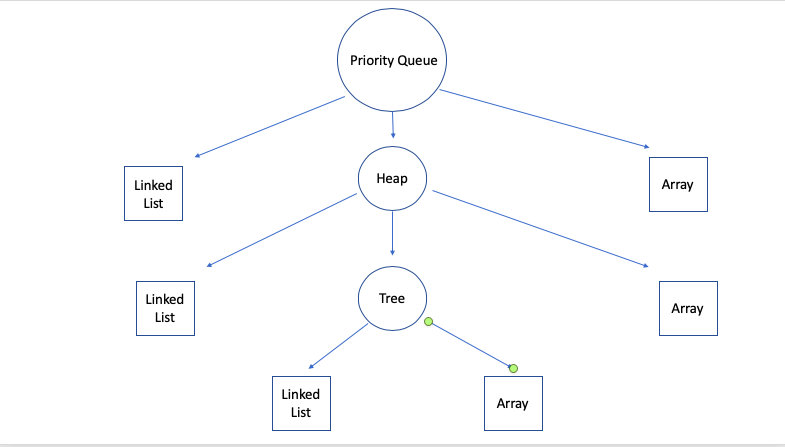 Arrays and linked lists are indeed simple data structures, but they are not more "fundamental" than other data structures. Everything in software is built out of contiguous memory to which the CPU has random access by address. All data structures are just abstractions built on top of that foundation.

It is a matter of perspective.

About "basic" data structures. Indeed array and linked list are fundamental data structures, two different implementations of the linear lists, of which stack and queue can be seen as offspring.

But you should also view array and links as basic tools to build other data structures, and sometimes they can be combined (I think hash tables with buckets use both constructs).

About priority queues and the-like. The binary heap I always consider to be a data structure that exists on so many levels. Distinguishing them helps in understanding the heap, but also makes you aware of these levels when looking at other data structures. The levels match most of your diagram, but the meaning of your symbol $\subset$ needs some explanation.

(1) Top level is the priority queue. It is an abstract data structure that contains pairs of data+priority. The (main) operations are "isEmpty", "insert", and "deleteMax".

There are several implementations of the ADT priority queue, each of them motivated by better complexity of the operations, or sometimes simplifying earlier complicated constructions.

(2) The binary heap is perhaps the most well known of these implementations. It is a complete binary tree, where the priority values are partially ordered: nodes have larger priority than their children, but there is no order between left and right subtrees. The standard ADT operations are implemented by moving the appropriate items along the tree, swapping nodes with parents or children when they have conflicting priority values.

However, although these operations are understood as if in a tree, their actual implementation does not use pointers/links as usual.

(3) As the tree used here is complete, its nodes can be mapped onto positions in an array, and rather than following pointers to parent and children, we compute their address. In this level, the binary heap is linear after all.

While I'm accepting the @Rotenberg's answer,

I think instead of think of the linked-lists, go one level deep and think about this in a linked nodes (linked objects or linked memory addresses) perspective which is what the real building box here. For arrays, the building box would be indexes (which again are memory addresses with content, but not linked to each other). Although Linked List Nodes are connected to each other (Nodes have their neighbors' addresses in them as pointers), Arrays doesn't have that. In memory, the indexes are continuously back to back and they don't contain the neighbor addresses within them

In that way it would be easy to think about the relationship between these data structures. 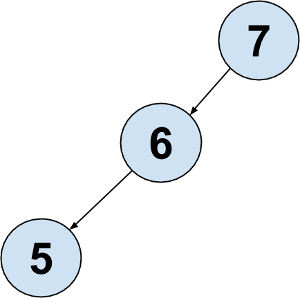 So, considering this node approach, you can't really say that linked-lists are a subset of Tree structure. Both of them are just a collection of nodes connected to each other with different policies.

Not the answer you're looking for? Browse other questions tagged data-structures or ask your own question.

2
If both could be implemented with the other, what are the differences between priority queues and binary heaps?

50
Does there exist a priority queue with $O(1)$ extracts?
1
Priority queue with ubounded number of elements (i.e., with dynamic storage)
5
Heap-like data structure allowing peek at largest & smallest
0
Is queue a storage allocation area in memory?
23
Does every data type just boil down to nodes with pointers?
0
Data Structure - Array of Array
1
Priority queue of constant size fit for extraction of K highest priority elements
0
Formal definition of the Dynamic Array - what is the Dynamic Array
2
Implementing Queue operations in $\Theta(1)$
2
If both could be implemented with the other, what are the differences between priority queues and binary heaps?