To give an example:

The relation to a specific scheduling problem is that I have undetermined times $x_i$ at which I acquire or release a resource. To avoid deadlocks, the pairs of (acquisition, release) must not overlap.

(In the actual problem, some time $x_i$ can occur in multiple such pairs, but that's another problem not considered here).

I think I found at least some idea, yet not sure if it is correct: The graph below shows the general structure of such a preorder (which we now treat as a directed acyclic graph): Given two such pairs $(x, x')$ and $(y, y')$, there is a path from $x$ to $x'$ (and from $y$ to $y'$). There may be nodes in-between, and edges connecting to that path. However, by our assumption that the pairs are unrelated, none of the incoming or outgoing edges in the section $x \to x'$ can reach $y$ or $y'$. We can now start constructing a topological sort. Without loss of generality, we reach $x$ as the first node of all pairs which we consider (which is not necessarily unique, but that does not matter). Because there are no edges between $x$ and $x'$ which connect from/to another point $y$ from another pair, we can continue our topological sort until we reach $x'$. Then, the pair $(x, x')$ is "compact" in our final order, that is, will have a $\leq'$ relation to all other pairs (because no point of any other reservation is between $x$ and $x'$, by construction of the total order $\leq'$). We can repeat this procedure every time we reach the first point of such a pair.

Is there any flaw in this argument? 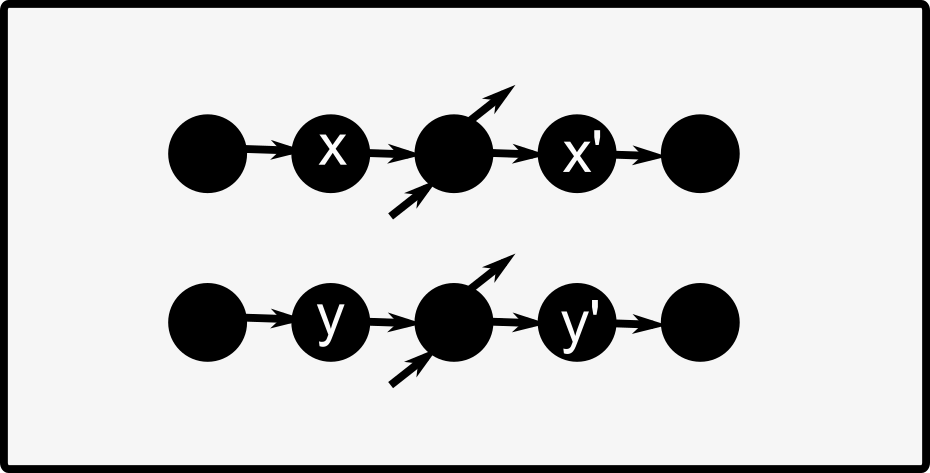 I think you mean partial order, as if you only have a preorder then there might not even exist any total order that is compatible with it.

Here is an other attempt at a proof:

Let $\leq$ denote a partial order on $X$. I claim there exists a total order $\leq'$ compatible with $\leq$ such that the following never occurs: $a\leq'\alpha\leq'b$ where $a \leq b$, and $\alpha$ is incomparable to both $a$ and $b$. (Note that when I say comparable/incomparable I always mean with respect to $\leq$)

Notice also that, because all elements between $a$ and $b$ (with respect to $\leq^*$) are now comparable to $b$, we have created no "bad" pair $(\alpha_i\leq x)$ with $a\leq^* x \leq^* b$, otherwise we would have $\alpha_i\leq x \leq b$ meaning that $\alpha_i$ and $b$ are comparable. And we have created no "bad" pair $(x\leq a)$, otherwise $(x\leq b)$ would have been a bad pair to start with, contradicting our choice of $a$. Any other type of "bad" pair we created must have already existed previously.

It is easy to show from here that $\leq'$ meets your requirements.

It seems you consider intervals totally contained in others or disjoint only. Intervals can overlap partially, e.g. $[1, 3), [2, 4)$.

Scheduling in the general case (any value function for tasks, where you look for the maximum sum of values) is hard (the corresponding decision problem is NP-complete). There is copious literature on algorithms to solve this, typically using dynamic prigramming. The special case where the value is the same for each task can be solved by a greedy algorithm: program the task that ends earliest, eliminate tasks conflicting with it, and repeat.

Not the answer you're looking for? Browse other questions tagged graphs partial-order or ask your own question.