I do not understand this question,because for saving Number of a's and b's memory is required,which FA does not provide.could anybody please explain this?

The claim that a DFA does not have memory is incorrect, a DFA in fact has finite "memory" in the sense that you can design the states to have meanings in terms of some variables. (Eg. being in state 5 means you've seen at least 5 a's, so you in some sense remember that you've seen 5 a's)

Now to address the question, 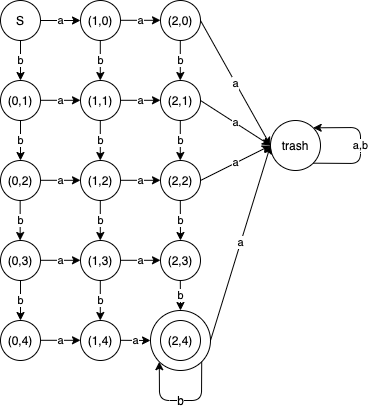 The only strings that do get accepted are those with exactly 2 a's and at least 4 b's. The different states that we have completely encapsulate all the necessary "memory" in the sense above.

3
Constructing deterministic PDA for not regular language
2
Help on using the pumping lemma?
0
Figuring out the language accepted by a DFA?
2
PDA to accept language with more a's than b's and c's
3
CFG for all strings of a’s and b’s that contain a different number of a’s and b’s
1
Is a^mb^n where m=n^2 a CFL?
0
What does this language notation specify?