Table-Driven Lexer and the Classification Table

I'm trying to implement a compiler for a custom language as part of an assignment.

I am still trying to figure out how to build the lexer. From what I understand, for a table-driven lexer, we have 3 tables:

My problem is mainly coming from the fact that the only example I've seen of the concept of a table-driven lexer is the "famous" (because I see it in every University's online notes) Cooper & Torczon DFA for reading digits. Page 25

From what I gather, the purpose of each of these is as follows:

2: To define what should happen next according to what's just been classified (If digit, go to state X, if letter, go to state Y)

3: Apparently this is used to check whether or not the string is accepted. Honestly I don't even know what the point of this is.

The grammar I'm trying to build a compiler for is much more complicated than the examples I've seen online. It contains more "atomic" symbols, such as operators (*,+,-,/,>, etc..) and reserved keywords (if, for, while, etc...)

By atomic, I mean symbols that stand on their own. (I.e. if is a symbol in its own right, not i and f) This poses a problem for me, since I won't be able to know if I'm reading if or a string of the form aifb

Here's what I'm currently trying to do:

The assignment specifies that I have to use a table-driven lexer.

A table-driven lexer is just a way of simulating a DFA. Lexer generators build DFAs from a lexical description, and then compile the DFA into the tables necessary to produce a lexical scanner.

Note that the goal is to not just identify lexemes, but to classify them by lexical type. Some lexemes have a unique spelling (like if and <=); others represent classes of symbols which have the same syntactic significance but different semantics. (That would be, for example, IDENTIFIER and NUMBER, which are two lexical types, each with a potentially unlimited number of different associated tokens.)

Lexical analysis with a state machine is slightly different from using a DFA to recognise strings, because the point of lexical analysis is to divide the input into a sequence of substrings, each of which is a token. It's important that this sequence is a partitioning of the string; every character is part of some token. That means that each successive token starts exactly where the previous token finished. In particular, that means that you don't have to worry about the if in the middle of different, but you do have to think about the for in fortunate. (All the same, it doesn't present a huge problem.)

As the Dragon book notes (and so do Cooper&Torczon IIRC), the vast majority of lexers use the "maximal munch" procedure (sometimes with a few exceptions), in which the lexeme produced at some point in the input is the longest one matchable with some lexical pattern.

So the precise algorithm used by the analyser when it is asked to produce the next token is:

It's always a good idea to try to avoid this backtracking, but it is not always possible as the above C example indicates.

We said earlier that the goal of the analyser is to identify the lexical type of the token. How does it do that? Simple. The various patterns are combined into a single DFA, using the standard NFA->DFA transformation. (That's in the Dragon Book.) In the DFA which results from that transformation each state is a set of states from the original NFA, and is an accepting state if any of the associated NFA states is accepting. We map that onto a token type by noting which of the NFAs contains the associated accepting state. If there is more than one NFA which has contributed an accepting state, then we choose one of them arbitrarily. (Usually, we've arranged the patterns in priority order so that we can simply say that the first pattern wins.)

That gives us a mapping from DFA state to pattern number, and that is the role of the Token Type table.

In case that explanation was too theoretic, I've created two graphs. The first one shows DFAs for four patterns: the token <, the token <=, the token if and the token ID (any identifier). In the transitions, please interpret "letter" as meaning "any letter other than i or f", which was just too long to put on the graph. And see the paragraph below about character classification. 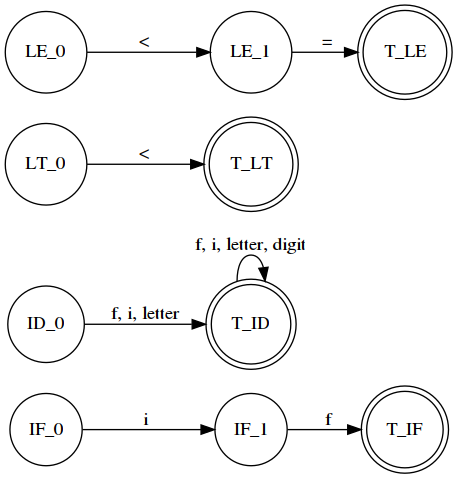 In the second graph, I show the DFA which results from combining these. I leave it as an exercise to construct the Token Type table.

The Transition table is simple: it just represents the DFA. It maps a pair <state, character> to a new state. Unfortunately, there are a lot of different possible characters -- 256, if we use 8-bit characters -- and usually quite a few states, and that would make for quite a large table, since it is essentially a two-dimensional array. To make the table smaller, we note that many characters have precisely the same transitions in every state. As a simple example, most of the 256 possible input characters are only valid inside character string literals or comments, and in those contexts all of them are effectively identical.

Not the answer you're looking for? Browse other questions tagged formal-grammars compilers lexical-analysis or ask your own question.

2
"Grammar inference" for 2-D images
0
What data is stored in the symbol table for a number token?
2
Language of words that begin and end with same symbol and have equal numbers of a's and b's
3
What defines a tool as a "compiler"
2
Why can we (apparently) implement CFG parsers only using (N)DFAs?
2
In what sense a type of parser is less power than the other?
2
Table-driven lexers in Engineering a Compiler 2nd Edition
0
What defines how many lookahead a lexer has?