I read the following in CRLS: 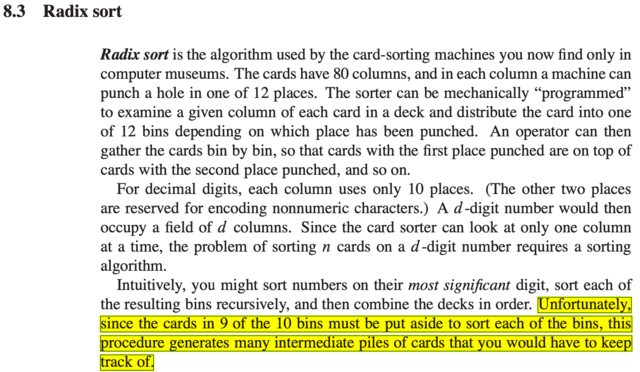 I don't understand the text in yellow. Why would radix sort not work so well if we sort by their most significant digit? What extra "piles of cards" is it referring to?

In case it helps, sorting naively by MSD doe not seem to work, even if all values are d-digit numbers:

where (i) is the result of sorting the previous column by the ith-highest digit.

It would work, the only problem is that it will generate a lot of extra piles for the intermediate results that are difficult to track.

Thus we have created 19 piles until now. To sort the pile of the numbers starting with 00 we need to create 10 more piles. If this process continues until the $d$ digit are sorted you can imagine that a huge number of piles are created (how many?).

This are the extra piles that the book was referring to.

If yoy use LSD radix sort you don't have to split the numbers in piles at all. You can nust sort the input pile by last digit, then the same pile by the penultimate digit and so on, after $d$ steps you will end up with the expected result.

Not the answer you're looking for? Browse other questions tagged algorithms sorting radix-sort or ask your own question.