I am studying algorithms and datastructures, and in CLRS chapter 33.4, the exercise 33.4-4 states the following:

We can define the distance between two points in ways other than euclidean. In the plan, the $L_m$ distance between points $p_1$ and $p_2$ are given by the expression $(|x_1-x_2|^m+|y_1-y_2|^m)^{1/m}$. euclidean distance, there, is $L_2$-distance. Modify the closest pair algorithm to use the $L_1$-distance, which is also known as the Manhattan distance.

I understand its an easy modification, however when I've been comparing my intuition with that of solutions provided online (e.g. https://sites.math.rutgers.edu/~ajl213/CLRS/CLRS.html), all I can find is that they all point to the number of points in the $\delta$ x $2\delta$ is increased to 10 (from 8), adding one point to the middle of both squares formed by the rectangle (here marked with red below): 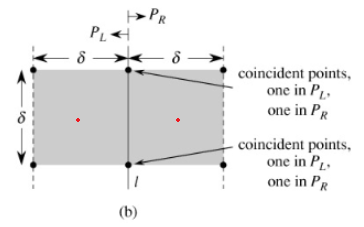 Can anyone explain to my why this is the case? Intuitively I cannot see why it should be the case that the number of points in the rectange should increase, when switching to another $L_m$-distance?

The Manhatten distance $\geq$ Euclidean distance from what I can see in all instances, but why should this infer, an increase in points found in the $\delta$ x $2\delta$ space.

What am I missing?

One approach to see what is going on here is via the notion of an open ball under a given distance. Given a distance $d$, the open ball of radius $r$ around a point $p$ is given by $B_r(p):=\{q\mid d(p,q)<r\}$, i.e. the set of all points with distance less than $r$ to the center of the ball, $p$. In the plane and under the Euclidean distance, a ball is an open disk (a disk with the boundary removed) of radius $r$.

Since $\delta$ is the minimum distance between any pair of points in the left half, any pair of points in the left $\delta\times\delta$ square has a distance of at least $\delta$. This is equivalent to saying that the open ball of radius $r$ centered at a point $p\in P_L$ contains no other point $q\in P_L$. So, the maximum number of points from $P_L$ that can be in the $\delta\times \delta$ square is the largest number of points you can 'fit' into the square such that the ball surrounding each of those points contains no other point from $P_L$.

An open ball under the Euclidean distance is an open disk. If you place four points at the corners of the $\delta\times \delta$ square, the open disks of radius $\delta$ centered at those points together cover the entire square, so there is no position in the square to place for a fifth point.

However, under the Manhattan distance, an open ball of radius $\delta$ is an open square with diagonal length $\delta$, rotated by $45$ degrees (an "open diamond"). If we place such an open diamond at each corner of the $\delta\times \delta$ square, then there is exactly one position in the square not covered by an open diamond: the center of the square. This is the location where you can place a fifth point under the Manhattan distance.

As for the $L_m$-distance with $m>2$, note that the balls under these metrics all strictly contain the ball under the $L_2$-distance. I'll leave it up to you to use this fact to determine the maximum amount of points that can be in the $\delta\times\delta$-square.

Not the answer you're looking for? Browse other questions tagged algorithms computational-geometry divide-and-conquer or ask your own question.

2
Sensor Cover Problem
4
Quickly locating nearest rectangle from a point
8
Minimum distance between start and end by going through must visit points in a maze
5
Find point with smallest average distance to a set of given points
3
Understanding Closest Pair Algorithm (CLRS)
3
How would I algorithmically “stretch” polygons on a plane by re-scaling the distances between interior points?
1
Longest Common subsequence theorem in CLRS