I was going through the classic text "Introduction to Automata Theory, Languages, and Computation" (3rd Edition) by Jeffrey Ullman ,John Hopcroft, Rajeev Motwani, where I came across few statements about a pushdown automata (PDA) which accepts by empty stack, as:

1. $n$, the total length of the input, is surely an upper bound on the number of states and stack symbols.

2. One rule could place almost n symbols on the stack.

Now here are some points by which I am possibly able to contradict the claim rather than proving it correct.

I don't understand where I am making the mistake, because the same statements are written in the 3rd edition of the book without any changes being made from the second edition which makes it probable that the statement is correct.

I have attached the corresponding portion of the text below: 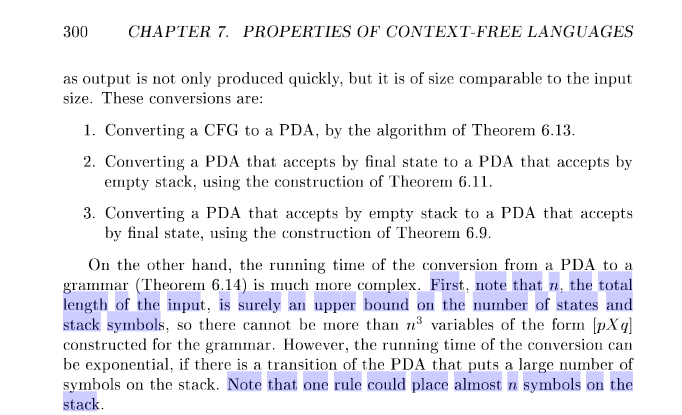 That section is not talking about parsing. The algorithms referred to are algorithms for converting between CFGs and PDAs of different types. The question is, as usual, "what is the computational complexity of the algorithm", and the response is, as usual, expresseded in terms of the size of the input -- to the algorithm.

The input to an algorithm which converts a PDA to a CFG is the PDA, and the size of the input -- the metric stick for the algorithm's complexity -- is the size of the *PDA". That's what the authors intend n to be.

How does one measure the size of a PDA? Simple: you write the PDA out as a string in some PDA definition language, and count symbols in the description. That's a completely fair procedure, because in order to call the conversion algorithm on the PDA, it's necessary to give the converter an input which represents the PDA.

Given that definition, the claims are not at all surprising. Every state and every alphabet symbol must be present at least once in the PDA description, so the size if that description is an upper bound. Similarly, it is possible that most of the description of the PDA is the description of a single rule, which could push almost n symbols.

Not the answer you're looking for? Browse other questions tagged formal-languages automata context-free pushdown-automata upper-bound or ask your own question.

3
Push down automata for $\{a^n b^n c^n | n \ge 0\}$
4
Relaxing the stack in a push down automata
1
Non Deterministic PDA accepted language not clear
2
Converting final state PDA to empty stack PDA
4
How powerful is a k-stack pushdown automaton with a unary stack alphabet?
3
When does a PDA split?
2
How these two Turing machine problems are different in terms of their decidability?
4
The upper bound on a Nondeterministic Finite Automata's configurations number
0
Generation regular languages by context free grammar
0
Extended NPDA implementation