I was going through the classic text "Introduction to Automata Theory, Languages, and Computation" by Jeffrey Ullman,John Hopcroft and Rajeev Motwani, where I came across the simulation of MULTI-TAPE turing machine using SINGLE-TAPE turing machine as follows.

Before the simulation the MULTI-TAPE turing machine is defined as follows:

A multitape TM is as suggested by Figure below. The device has a finite control (state), and some finite number of tapes. Each tape is divided into cells, and each cell can hold any symbol of the finite tape alphabet. As in the single-tape TM, the set of tape symbols includes a blank, and has a subset called the input symbols, of which the blank is not a member. The set of states includes an initial state and some accepting states. Initially: 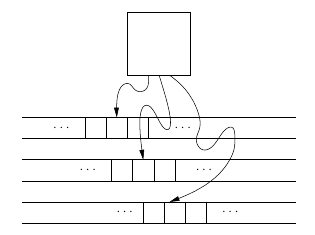 Now the simulation is as follows:

$Theorem$ $1$: Every language accepted by a multitape TM is recursively enumerable.

PROOF: The proof is suggested by $Fig.2$. Suppose language $L$ is accepted by a $k$-tape TM $M$ . We simulate $M$ with a one-tape TM $N$ whose tape we think of as having $2k$ tracks. Half these tracks hold the tapes of $M$ , and the other half of the tracks each hold only a single marker that indicates where the head for the corresponding tape of $M$ is currently located. We assume $k = 2$. The second and fourth tracks hold the contents of the first and second tapes of $M$ , track $1$ holds the position of the head of tape $1$, and track $3$ holds the position of the second tape head. 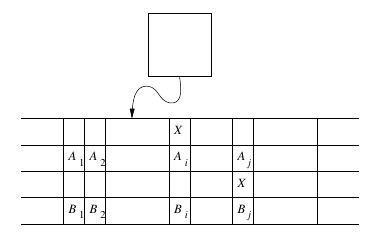 To simulate a move of $M$ , $N$ 's head must visit the $k$ head markers. So that $N$ not get lost, it must remember how many head markers are to its left at all times that count is stored as a component of N 's finite control. After visiting each head marker and storing the scanned symbol in a component of its finite control, $N$ knows what tape symbols are being scanned by each of $M$ 's heads. $N$ also knows the state of $M$ , which it stores in $N$ 's own finite control. Thus, $N$ knows what move $M$ will make.

$N$ now revisits each of the head markers on its tape, changes the symbol in the track representing the corresponding tapes of $M$ , and moves the head markers left or right, if necessary. Finally, $N$ changes the state of $M$ as recorded in its own finite control. At this point, $N$ has simulated one move of $M$ .

We select as $N$ 's accepting states all those states that record $M$ 's state as one of the accepting states of $M$ . Thus, whenever the simulated $M$ accepts, $N$ also accepts, and $N$ does not accept otherwise.▄

Then the author moves on to say,

Why one cannot store tape-head positions as integers in the finite control?

One could argue that after n moves, the TM can have tape head positions that must be within n positions of original head positions, and so the head only has to store integers up to n. The problem is that, while the positions are finite at any time, the complete set of positions possible at any time is infinite.

My query is as follows : When the author considers the question,Why one cannot store tape-head positions as integers in the finite control? He justifies it by saying that The problem is that, while the positions are finite at any time, the complete set of positions possible at any time is infinite. Now the position number is finite. Now as per me, number of moves is also finite,so on adding or subtracting a finite number(due to the moves) to the position, we get a finite number as position. But is it so that the infiniteness described above is due to the fact that we do not possibly know the maximum number of finite moves exactly.

The author then derives the time-complexity of operation of the simulation as: