Over the alphabet {a,b,c,d}, how would i construct a NFA that only accepts strings that end with a letter that is already part of the string?

I've been trying to create a NFA that accepts strings that end with a letter that exists in the string. For example abcdb, cbdd, acac etc. while strings like abc aacd etc are not accepted since the last letter wasnt in the string before the last letter was read. I only seem to be able to create a NFA that accepts a subset of the language. What is the right way to go about it? I'm very lost. 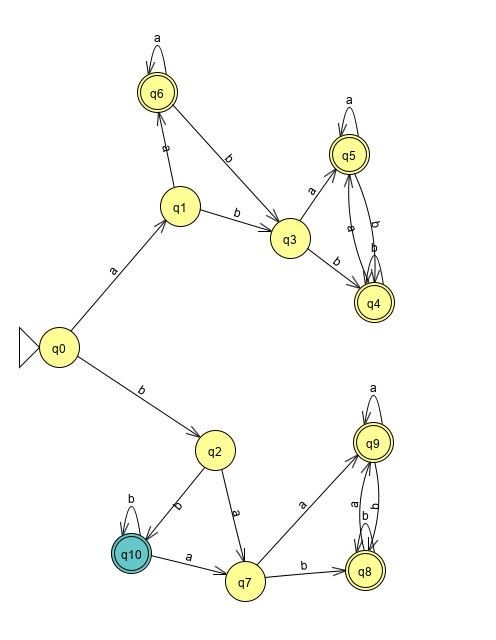 This is my try at a 2 letter alphabet but i feel like for a 4 letter alphabet the NFA is going to be huge. Is there a methodology I'm completely missing or do I just use brute force?

However, you automaton is a DFA. It does not make use of an NFA's non-determinism. That's why it doesn't easily scale for bigger alphabets and it grows exponentially.

In simple words, non determinism means that there can be more than one outgoing transitions from a state for the same symbol (plus, there are ε-transitions). Then the NFA accepts iff at least one of all the possible paths accepts.

Do you see how to scale this for an alphabet of size 4?

Not the answer you're looking for? Browse other questions tagged automata regular-languages finite-automata regular-expressions computation-models or ask your own question.

1
Is it possible to shorten this Finite Automata Transition Graph?
2
Finite State Machine that only accepts strings with equal number of 0's and 1's
1
Does a given e-NFA accepts all the Strings?
1
DFA that accepts strings with last character being repeated at least 1 time before
1
NFA that accepts 0* or 1*
1
Explaining NFA in words
1
Can converting NFA to DFA change the language?