What the difference between the Fourier Transform of an image and an image histogram?

Consider this small picture of a sunflower, and its histogram: 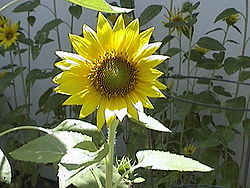 This post is a copy from the top voted answer to the question What does the Fourier Transform mean in the context of images? The answer is math.sx user due to dls.

In sound processing, the Fourier Transform has a physically intuitive meaning. A sound or function $f : [0,b] \rightarrow [-1,1]$ can be represented as a trigonometric series. And each term of the series corresponds to a frequency which you perceive. Many effects (like filtering, reverb, etc.) have an interpretation in the frequency domain which is useful for analysis. Unfortunately, the physical interpretation isn't as simple when we start talking about images. But on the analytic usefulness transfers over.

If we're talking about grey-scale, then an image is simply a function $f : [0,1]^2 \rightarrow [0,1]$. It takes a point in the square $[0,1]\times[0,1]$ and produces a value between 0 and 1, the intensity. The Fourier Transform just says we can represent this function in the frequency domain using a countable basis of trigonometric functions. Say you want to blur an image; this corresponds to a low-pass filter in the frequency domain. The following link shows many examples of Fourier transforms of images, gives an explanation of the physical interpretation (which I don't claim to understand entirely) and shows examples of basic image processing. This website shows more illustrative examples.

Another very important use of (variants of) the 2d-Fourier transform is image compression. The Wikipedia page for the JPEG codec lists the basis functions used to represent images.

Finally, note that if you're talking about an RGB image you can represent the image using the Fourier transform on each color component.

Not the answer you're looking for? Browse other questions tagged image-processing graphics fourier-transform or ask your own question.

1
Transform inverse result
1
How can you see which points in the spectrum is from which pixel in the original image?
6
What are all the differences between the Gibbs phenomenon artefects and JPEG artefacts?
2
What is the reason that is FFT multiplication slower than other methods for small N?
3
How is this definition of the quantum Fourier transform to be understood?
2
What is the significance of the imaginary parts in the output of an Inverse Fourier Transform? Can I avoid them?
2
What's the connection between the two “Fast Walsh Transform”?
1
Difference between the Magnitude and the Phase Spectrum of the Fourier Transform?