Algorithm design: find any path in an undirected acyclic graph which has a total sum of the nodes as a specific value

The question was asked in an interview, and I'm not sure if this is the most optimized answer, but here goes-

You have an undirected acyclic graph, where each node has a non-negative value x and the edges have 0 value. You need to find a path with any number of nodes on it such that the total sum of all node values is exactly k. There are N nodes in the graph. You can start at any node.

I gave the brute-force solution for this problem, which is basically do a dfs on each node until you find a valid "root" node, such that it has a path to one of the other nodes, with a total sum being k. The time complexity of this solution would be n^2, since we are doing DFS on each node.

The question was posed as a delivery problem, where you have N connected houses, each having a package of weight within the range 1 to k, and the truck can start at any house and should follow a path, and has to pick the package from every house that is on that path. The weights should sum exactly to k.

Your graph is a bunch of trees, and you can process each of them individually. For a given tree, choose an arbitrary node as the root, and do dynamic programming in the following way to fill up $A$. For any node $v$ we have that

Thanks to @j_random_hacker for the suggestions on how to improve the algorithm.

First thing is to root the tree, preferably with a node that splits the tree evenly among its subtrees. That is, its subtrees have the same size. Though this is not required as we can still do an average case analysis.

Now, sort $L$ and sort $R$. Then using the two pointer method (see method 4 here), we walk from smallest to largest in $L$ and largest to smallest in $R$ looking for the value $k - \text{val}(u)$. Where $u$ is the root node (since it was not included in the partial sums, we must add it back in, or rather subtract it out).

If we find this value, return the two nodes $L$ and $R$ where it was found. The path between these two nodes, through $u$, are a path of value $k$.

If we do not find this value, we know the path of value $k$ does not contain our root node $u$. Thus, we recurse on both (or all) subtrees.

With a binary tree, on average the recurrence would be:

If the degree is not bounded then instead of just scanning $L$ and searching in $R$ we'd have to do this for all pairs of subtrees. Thus, on average we have:

Where $k$ is the branching factor.

You could possibly get better bounds by realizing that the average size of $L$ and $R$ for all pairs of subtrees would be $n/k$ thus bringing us to: 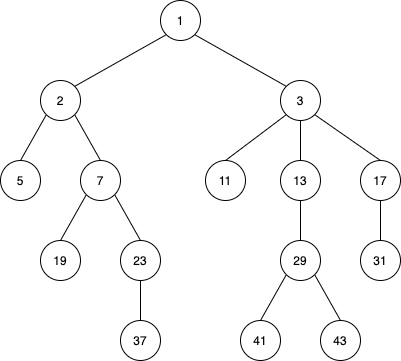 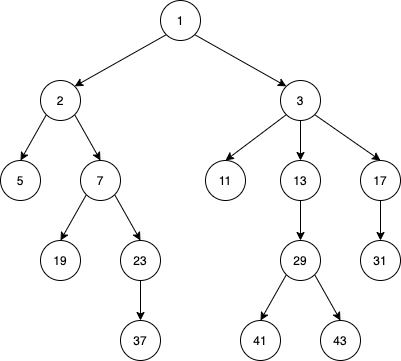 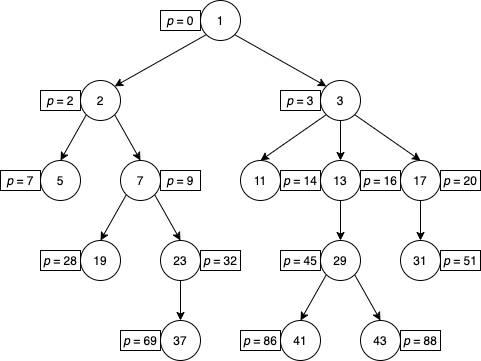 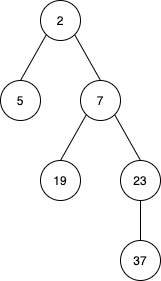 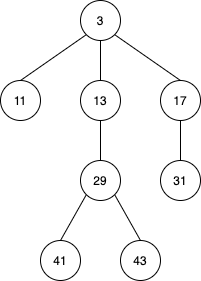 We wouldn't find a solution in the left subgraph since the sum of all values is less than $k$. We can root the right subtree as: 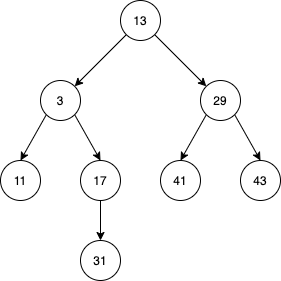 We wouldn't find it crossing 13, so we'd recurse again on:

The left subtree can be thrown out for the same reason we did earlier. Then we would immediately find it in the right subtree as $[41, 29, 43]$ for a path of value 113.

You can also do what Bernardo suggested by deleting all nodes with value larger than $k$ then call this algorithm on each remaining tree in the forest.

You can also ignore an entire tree (or subtree) if the sum of all nodes in that subtree is less than $k$.

Root all trees as binary trees

When computing partial sums, since we are not including the root node, we can use this step and convert it into a binary tree (at least from the root's perspective) by adding at most a linear number of nodes.

If the root has $d$ children, then we create a balanced binary tree with $d$ leaves where the leaf nodes are those $d$ children and all other nodes are value 0. We compute the partial sums and follow that formula above to determine if it crosses the root node of this new tree. 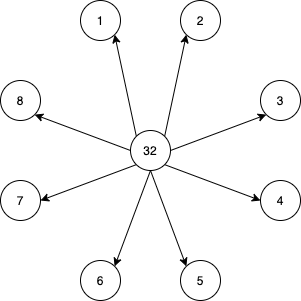 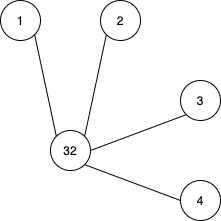 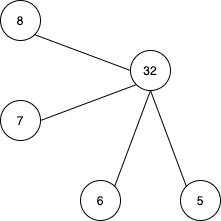 With this optimization we can bring the recurrence (even without bounded degree) back to:

You can sort implicitly by running Dijkstra's algorithm instead of just doing a dfs. This won't asymptotically be an improvement however since it will still take $O(V \log V) = O(n \log n)$ to run Dijkstra's.

Not the answer you're looking for? Browse other questions tagged graphs graph-traversal depth-first-search or ask your own question.

4
Find node that splits tree in half

2
Finding any path between nodes of implicit, finite, regular, undirected graph
3
Dwarves color their houses
1
Finding the Shortest Path that connects k nodes in a graph
0
Find a path that contains specific nodes without back and forward edges
0
Find longest path in graph with N nodes and N edges
3
Minimize number of DFS searches in a graph
1
Extracting a spanning tree from a directed acyclic graph with minimum total distance between terminal nodes
1
Determine whether there exists a path in a directed acyclic graph that reaches all nodes without revisiting a node
3
Existence of walk in undirected connected graph where nodes must end with assigned value
5
Longest path length in an undirected tree, can we prove this algorithm is correct (which it is)?