Why Convolutional codes is easy to factor/handle the uncertainty of a bit being a 0 or a 1 into the decoding? 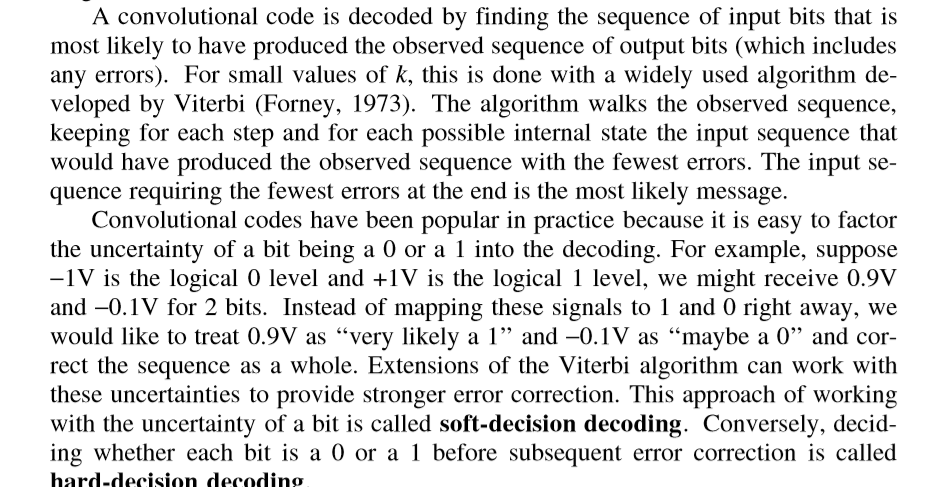 My question is about this part.

[Convolutional codes have been popular in practice because it is easy to factor the uncertainty of a bit being a 0 or a 1 into the decoding.]

Why is it easy to use convolutional codes to factor the uncertainty of a bit?

Having soft-decision decoding, helps when you get to the stage of decoding the sequence of bits, as now, you have the probabilities of each bit being 1 or 0 (by itself, apart from the sequence), which can be fed into the computation of the likelihood of each sequence in the maximum likelihood sequence detection.

A simple example to illustrate: imagine if there are two allowed sequences coming out of the convolutional code: 10 and 01. Now, the receiver gets a sequence that it thinks is 11, but the first 1 only with high certainty (a very likely 1, let's say) whereas the second 1 only with low certainty (maybe 1, if we have to decide between 0 and 1, we say 1). This information helps to decide that the sequence was probably 10 rather than 01. Whereas, with hard decisions, you have 11 and both 10 and 01 are equally likely (e.g., same Hamming distance).

Why is it easy to handle the uncertainty of the bit by bit decisions? This is merely a statement that the decoding algorithms like the Viterbi algorithm, are fundamentally designed to accept the uncertainty values (probabilities) of the bit by bit decisions, as inputs. You could imagine some other algorithms where this is not true. But it is very natural and easy with such maximum likelihood sequence detection algorithms like the Viterbi algorithm.

Not the answer you're looking for? Browse other questions tagged probabilistic-algorithms error-correcting-codes or ask your own question.

0
Linear codes : why has the parity check matrix dimensions $(n-k)*k$?
2
Why double error correction and quadruple error detection cannot occur at the same time?
2
When is Viterbi's algorithm practical?
1
How to read Nasa Convolutional code?
1
Why high and lower bit of generator must be 1?
1
Why frame must be longer than generator polynomial?