I have a Data Structure question where I need to manage an hotel, each room has a number between $1-n$
and it can be occupied or not.

Using AVL OR B-Tree is a must.

I have to support these functions:

1) $\text{Init(n)}$ : Initializes the data structure with $n$ unoccupied rooms, the indexing of the rooms is $1-n$
this has to work at $O(n)$ time complexity

For the next functions: $l$ and $r$ do not have to be a number of an occupied room-

2) $\text{GetUnOcc(l,r)}$ : Gets $l$ -Left and $r$ - Right (Does not have to be an occupied room number) , 2 numbers that defined a range of numbers and I need to count how many hotel rooms are not occupied between them (Including). Has to work at $O(\log_2{n})$ Time complexity

3) $\text{GetMinUnOcc(l,r})$ : Gets $l$-Left and $r$-Right, 2 numbers that define a range of numbers, this one adds the person to the hotel at the smallest room that is not yet occupied between $l-r$ (Including).
Has to work at $O(\log_2{n})$ Time complexity

4) $\text{GetOut(r)}$ : It gets a room number and deletes the person from that Room/Hotel, making room number $r$ unoccupied.
Has to work at $O(\log_2{n})$ Time complexity

Init: I thought about using an AVL tree with a boolean array.
We initialize it $O(n)$ by just making an array of False (Unoccupied) which takes $O(n)$

GetMinUnOcc is much harder because I cannot determine which value is the smallest, let's say $l=3$ and $r=10$ and every room between $3-8$ and room $10$ are occupied, and I need to return $9$ (because it is the smallest which is not occupied)

Let's say I have this tree (as Steven suggested to build an AVL of unoccupied rooms) so in this matter it is $\text{Init(10)}$ And Now I want to do $\text{GetMinUnOcc(5,7)}$ so it should delete $5$ from the tree as it will become occupied. But in what you suggest, we find the successor of $l=5$ which is his parent, $6$ and delete it, but, $5$ is not occupied and we want to return the minimum so we need to actually delete $5$, where am I wrong? Thank you! 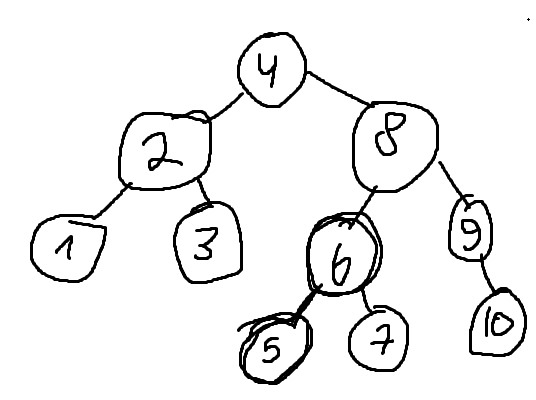 I would appreciate your help / hints to solve this hard question! Thank you!

Maintain an AVL tree $T$ containing the indices of the unoccupied rooms. For each vertex $v$ of the tree additionally maintain the number $\eta(v)$ of vertices in the subtree of $T$ rooted at $v$.

This can be done using a simple array.

Note that the complexity depends on the total number of rooms, and not on the number of (un)occupied rooms. So we might as well store all rooms. The trick to do the counting of free rooms is basically the same as in the case of AVL trees in the other answer. On top of the linear list of arraus we build a complete binary tree, such that each node stores the number of free rooms in the interval of rooms below.

The next free room from position $\ell$ is found as follows. First go up in the tree untill we find a node where we came from left, and the right subtree has an unuccupied room. Then go down to the first free spot.

Going up and down, left and right is done using bit-matic. I strore the rooms in the odd indices. The ndes above are even. The number of trailing zeroes in the binary index indicates the level of the node. Left nodes end with "01" and then zeroes, right nodes have "11" and zeroes.

Storing the complete tree as an array is also done for binary heaps. However, the representation is different. For the heap the root is the first node in the array. Kind of upside down from this one.

Not the answer you're looking for? Browse other questions tagged time-complexity data-structures arrays avl-trees or ask your own question.

2
Use AVL trees instead of Chord algorithm for Distributed Peer to peer Hash tables
4
Why do we need double-rotations to rebalance AVL trees?
3
Can ropes (AVL trees) be interned?
0
Data structure with init $O(n)$ and interval max $O(\log n)$
0
Rank of root in AVL tree
0
Prove that AVL tree has this kind of property with Fibonacci sequence