I have a bunch of objects that I am not sure on how to represent in order to maximize memory occupancy and possibly avoiding large CPU overhead. The most natural way to see the whole data structure is as a tree. A picture is worth a thousand words

Each tree node contains an object that I simply represented as an integer. As you can guess, at each layer there are many nodes that are equal. For example, the last layer has 48 leaves; however, there are only two different kind of data in the leaves, namely 11 and 12.

In addition, between each two connected node there may be a bunch of other objects. At each layer, the list are all equal. I've just shown an example using the L_0 array on the two edges of the first layer.

Each layer of the list can be thought as having a label, as shown on the left of the tree. Now, based on some other checks, not relevant for our purposes, some of the paths may be cancelled. The cancellation condition can be thought as

In our example the pattern is shown in the top-right corner. We observe that all the edges between 0 and 8 are useless, which in turn means that the leaves labeled as 8 descendant from 0 should not be reachable. In the same fashion, the edges 1 -> -> 9 and 1->10 are useless. In the picture, this fact is represented by a red background for the nodes whose incoming edge is useless.

At the last layer, the same thing happens. In this case we have also blue nodes, that simply signals that the incoming edge to that node is useless not (only) because of the pattern, but because the parent is red.

In an effort to improve memory occupancy, I simplified the data structure using a linked list, like shown in the image below. 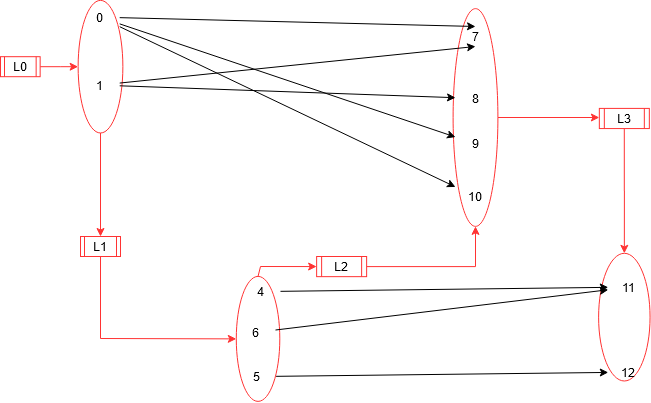 Basically, each element of the L_x lists can be thought of SimpleNode (the array-like objects in the picture); all the nodes belonging to a layer are instead AggregateNode (the elliptic shapes in the picture). The red arrows shows the links between the nodes of the linked list.

Since the edge cancellations may happen only between nodes with the same label, I've decided to use additional pointers to connect the internal tnodes to their parents/childs with the same label. Take care that this parents/childs are not the same ones of the original tree. For example node 9, in the full tree, has 3 parents: 4, 5 and 6; in the linked list it only has 0 as parent.

Browse other questions tagged data-structures optimization trees linked-lists or ask your own question.

1
Two red children in a red-black tree
2
Why don't nodes carry as many pointers as possible in a skip list?
39
What is the difference between radix trees and Patricia tries?
22
Does every data type just boil down to nodes with pointers?
2
Binary trees and preallocated nodes
3
Tree traversal with conditional summing values from nodes
1
What's the name of this tree-like data structure?