Is the leapfrog automata problem in P?

So, to reiterate, is the blackout decision problem in P? Alternatively, can we show that it's NP complete?

Examples: A leapfrog automaton has two nonempty registers, containing VNS and ED, respectively. Among other words, it accepts VEND, EVEN, SEVEN, and the empty word. (Note how the order of letters in a register is irrelevant, and letters may be reused, and the first letter may come from any register.) It rejects the word SEVER, because the symbol R doesn't appear in any register. It rejects the words DEN and SEEN, because each letter must come from a different register than the one before.

ETA: If the alphabet is unary ($\Sigma = \{\mathtt{a}\}$) then the blackout problem is in P. The problem becomes finding a tour that visits each register the appropriate number of times while obeying the "different registers" constraint. Starting from the initial (empty) register, my algorithm is to iteratively visit whichever other register currently has the most unvisited letters (break ties arbitrarily). If there is a tour that satisfies the different-registers constraint, this procedure will find it.

Such a tour does not always exist when there are big disparities between the register sizes. For example, if the automaton has two nonempty registers AAAAAA and AAA, there is no accepting path (for any word!) that visits each letter in each register exactly once.

I haven't figured out whether the problem is efficiently solvable when the alphabet has two letters in it {A,B}.

[*] This implies that the Blackout Decision Problem for leapfrog automata is in P when we restrict to machines whose registers have no letters in common. The general case has branching factors which may make it harder than P.

For an NP-completeness proof, let's rephrase the Blackout Decision Problem as "Given a leapfrog automaton $M$ and word $w$, does $M$ accept $w$ without revisiting any of its registers' symbols?". It's probably your intuition that the "visits each symbol once" version is no easier, and a reduction to that version is pretty easy, so I'll omit that.

We'll reduce to a problem I'll call DECAY-3SAT, which is a version of 3-SAT that allows the truth of each variable to decay to false in subsequent clauses. For example, $v_0=1$ (true) and $v_1=0$ (false) satisfies $(v_0\lor v_1 \lor v_1)\land(\lnot v_0 \lor v_1 \lor v_1)$ because $v_0$ can become false for the second clause. Note that the verifier still runs in polynomial time because it will be given the decay events along with the initial literal truth values. Additionally, DECAY-3SAT is no weaker than 3-SAT because a standard 3CNF formula $\phi$ with $n$ variables is satisfiable if and only if $\phi'\nameq\underbrace{\phi\land\dots\land\phi}_{n+1\text{ times}}$ is satisfiable with decay since one of those $\phi$ will be evaluated without decay, as decay can happen at most $n$ times (once per variable).

Given a 3CNF formula $\phi\nameq C_0\land\dots\land C_{m-1}$, we will construct a leapfrog automaton $M$ with input $w$ such that $M$ accepts $w$ if and only if $\phi$ is satisfiable with decay.

Without yet going into the details, we can construct $M$ and $w$ in a way that implements simple programs made of 4 kinds of instructions. Those instructions and their use in this reduction are:

Such a program will reject if it tries to decrement the number of clause symbols in a register that does not have any. Otherwise, it will accept. Hopefully that's enough to convince you that the NP-hardness reduction holds if we can actually construct an $M$ and $w$ to implement the program.

Now comes the task of writing a compiler. We'll do so by adding symbols to $M$ and $w$ for successive instructions. Luckily the instructions are pretty restrictive, so we can track the current clause $C_i$ associated with each one, even though we don't know whether the current register will be $r=2i$ or $r=2i+1$ during execution.

To guide execution through the appropriate registers, most symbols we introduce will have the clause index $i$ as a subscript. For example, we'll add quite a few $\lambda_i$ symbols to registers $2i$ and $2i+1$ simply as a way to jump between them.

This complies to a leapfrog automaton $M$ with 4 registers, 2 for each clause, and a word $w$. 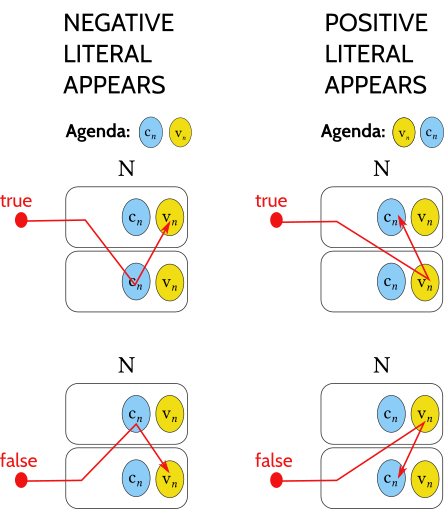 [Interaction 2] Because there are two registers per clause, the current register simultaneously encodes (a) what clause we're currently considering and (b) whether the current variable has been assigned true or false. Because these are DECAY-3SAT problems, the goto-next-clause gadget allows a true assignment to optionally decay into a false assignment at any point, while preventing the reverse decay. 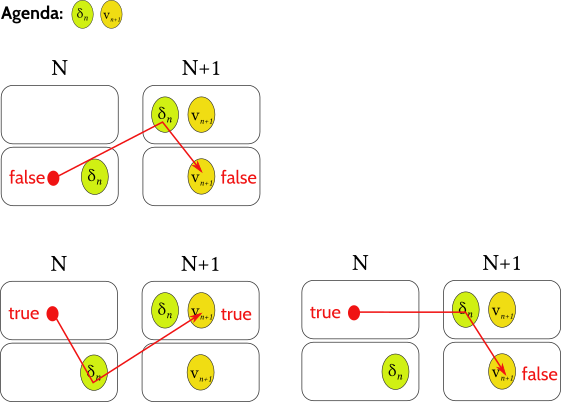 Not the answer you're looking for? Browse other questions tagged complexity-theory turing-machines or ask your own question.

14
Is the two-color leapfrog problem in P?

10
Is this classic puzzle book game NP-complete?
1
Determine whether a TM visits each of its states exactly once during computation
2
TSP decision problem vs TSP optimization problem
3
Complexity Classes UP and US
1
Which of the following problems can be reduced to the Hamiltonian path problem?
0
What complexity class does is this set of grammars? NL-complete?
2
Problems for which a small change in the statement causes a big change in time complexity