Why does Slotted Aloha work?

So the way I understand it, if station A and station B, for example, try to transmit a frame at the same slot, a collision occurs, leading to an attempt at the next slot. But wouldn't the algorithm just repeat itself? The same two stations would try again on the second slot and it would still cause a collision. Also, it means that the first slot would remain unused.

Am I understanding it wrong?

This is a good question. As you study more, will find that all the Aloha protocol variants are highly inefficient and ambiguous. And yes, slotted Aloha’s central concept seems to suggest that a collision sparks an infinite loop of data collision. Let’s look at the (only) two tenets of the Pure Aloha protocol from UOH, 1971:

The use of regular intervals increases efficiency significantly. 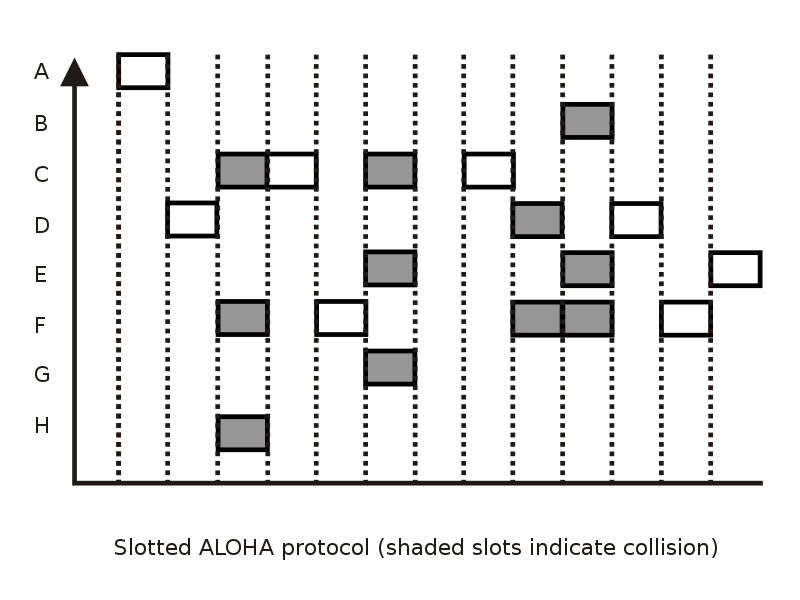 Notice how devices C, F, and H encounter a collision when they all try to send data in the same interval? Device C tries to resend the data right away, device F waits for a few frames and device H has yet to try sending the data again.

When it comes to the Aloha protocols, what does one mean by sending the data “later”? One second from now is later. Three slots is later. Two years is later. That is up to each device to decide.

If later means the same frame for every device, than yes, infinite collision will occur. This is why a quality method must be developed to prevent this behavior. In programming this is called a back-off scheme.

A predictable and efficient back-off scheme will attempt to implement a probable generation of frames (both new frames and repeats from data that collided) that reduces the probability of collision, such as a Poisson Distribution.

Not the answer you're looking for? Browse other questions tagged computer-networks or ask your own question.